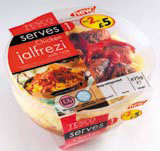 Living on your own is no longer seen as the lot of those unlucky in love or the preserve of widowed pensioners. A variety of social circumstances and ‘life choices’, from the advent of the Bridget Jones generation to the self-styled geezers that lapped up ‘lad mags’ during the past decade, has made living alone a growing phenomenon. And these individuals are wielding increasing consumer choice and influence.

In 1971, fewer than one in five UK households were occupied by one person, but 20 years later this has risen to almost one in three (source: ESRC). In short, the single-person household has become a demographic – expected to account for 40 per cent of total households by 2010 – and an affluent one at that.

The 2001 census showed a 47 per cent rise in SPHs under pensionable age, compared to just 4.6 per cent over that threshold. But do retailers – and designers – actually target this group effectively?

Tesco claimed a first last week with Serves One (pictured), a range of ready-meals – designed by Pemberton & Whitefoord – that caters specifically for the needs of single people (DW 28 August).

‘Many single people don’t have time to cook for themselves and lots of families don’t sit down together at meal times,’ says Tesco product development manager Seaneen O’Neill. ‘This range is packaged in a clear, polypropylene bowl so you can see what you’re buying. The packaging allows you to see the portion size and it’s in a shape you can hold, which means there’s no washing up.’

The dishes themselves focus on ‘popular cuisine’, O’Neill adds, and Tesco is using the range to attract new people to the ready-meals market. But other than assess the optimum portion size for individuals – about 475g in Tesco’s book – does the design really present anything new to single shoppers?

‘There’s [still] some sort of stigma about meals for one,’ he explains. ‘Lonely people sitting on their own. But this is more upmarket and offers greater choice – what you want, when you want it. You can eat it on the hoof or as part of a main meal.’

The see-through pack and ‘more qualitative and individual’ graphics are distinct from the ‘cardboard boxes’ typical of the category and enhance the appeal of the products, Pemberton says.

Perishability of food is an issue in the sector, though Pemberton believes concerns about individual portion sizes are ‘more about not getting enough than wastage’. Beyond that though, he acknowledges ‘very little’ branding activity makes any particular effort to reach single person households.

James McCoy, Mintel senior consultant for consumer goods, agrees that singles ‘haven’t been well catered for’. However, according to a Mintel research report, ‘It is only a matter of time before providers wake up to this significant market.’

But knowing how to approach this segment is almost as tricky as deciding what to wear on a first date. As McCoy points out, ‘the whole food market is moving towards convenience’ and it’s hard to tease out the needs of SPHs from those of other time-pressed shoppers.

Equally, the term SPH encompasses a number of age and social groups. ‘Life stage’ is the salient factor for branding. ‘There’s not much difference between a young single person and young couple in their buying tastes,’ says McCoy.

‘Retail goes where the money is,’ says Barrie Legg, design director environments at Conran Design Group, agreeing with McCoy that ‘indulgent’ and ‘individual’ values are now common to most consumer categories.

The group has worked with companies ranging from Orange to cafÃ©/ restaurant chain Albert Heijn Ahold, in targeting SPHs. Legg says the brand message will always be about culture and aspirations, while the specifics of pack design, for instance, respond to particular customers.

But Martin Raymond, founder of forecaster The Future Laboratory, has words of warning and advice [see Serving the singletons, below] for retailers who only pay lip service to this growing cohort.

‘Supermarkets must recognise the pattern of singles’ lifestyle as well as the fact they are there,’ he says. ‘Likewise, they must be aware that in city areas, the family-style shopping pattern, as in one big shop per week, is in decline. Singles shop often and small.’

Perhaps in the future we’ll see not only products that cater for single consumers, but also supermarkets and shopping venues that have a greater focus on this growing market.

Modern single people are not shy wallflowers, but ‘Lone Wolves’, male and female alike. They describe themselves as ‘highly vocal’ and ‘sensitive to overt targeting’, but ‘welcome honest, open dialogue’ with brands.

In the supermarket, they are usually ‘New Essentialist Shoppers’, who expect to be treated fairly and not marginalised or charged extra for their single status.

Their main complaint is that retailers are still too geared up for families. They want more single exit tills and fast track, ‘six items or less’ basket areas, especially in urban sectors where they dominate the demographic.

Design solutions might include an ‘essentials aisle’ – almost a shop-within-a-shop for key items – and an ‘urban basics’, Bento-type box for healthier options, ‘a sharp-looking, beautifully packaged range [with] opaque outer layer and frosted, soft colour coding for the inner sleeve’.