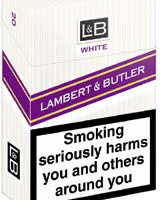 Cigarette companies are ramping up investment in packaging, as they move to meet regulatory requirements in force from the end of the month.

From 30 September tobacco companies will have to rely on consumers’ familiarity with their branding as distinguishing descriptors such as ‘light’ and ‘mild’ are outlawed and giant health warnings (30 per cent of the front of the pack, 40 per cent of the back) become mandatory.

Packs are one of the few remaining outlets for branding opportunities, now that advertising has been stubbed out (DW 10 April).

Imperial Tobacco brand development manager Rachel Smith, who manages brands including Regal, Embassy and Superkings, admits the new legislation has presented her with ‘a difficult brief’. She says the company is currently brainstorming plans for future packaging concepts.

‘We’re early on in the process, but have some ideas in the pipeline.’ The company is ‘looking to instil premium brand values’ in the products to differentiate them in the market,’ she says.

‘Changing the design of packs is an option, but may not be commercially viable. Other ways of communicating with consumers is to insert trivia cards into packs, for example,’ she explains.

It is currently working with The Open Agency on ‘a couple of packaging areas’ and results are due ‘shortly’, Smith adds. Design Central and Village Design have both worked with Imperial Tobacco on its recent colour- coding exercises.

British American Tobacco, which works with Dagwoods Associates and an in-house team, is using colour as a way to differentiate its light products.

‘We had to ensure we didn’t simply use a lighter colour to imply “light”, which is not allowed,’ a spokeswoman says. BAT is including cards inside packs to explain the changes to consumers.

Imperial Tobacco has also chosen to differentiate its light brands by colour. It has introduced Lambert & Butler Gold and Superkings Blue, where once the word ‘light’ would do.

But the colours used for each brand must be different, says Smith. ‘[The tobacco industry] is not allowed to set its own industry standard by agreeing on one colour for light products,’ she explains.

A spokesman for Philip Morris International – producer of arguably one of the most recognisable ‘light’ cigarette brands, Marlboro Lights – agrees that product differentiation is the most important factor. But she says all that is needed is to remove the descriptors and let the branding do the talking.

‘We are simply taking off our lights descriptor. In countries such as Brazil where we have already taken away descriptive terms, most people have not even noticed the pack change,’ he says.

No one knows how far European legislation will go in the future to prevent companies from promoting their brands. The Government is considering introducing explicit photographs to packs to underline health messages.

These are already mandatory in countries such as Canada and Brazil, which also feature graphics such as a limp cigarette depicting the affect of smoking on fertility.

‘Anything is possible – there’s no reason why the UK won’t introduce mandatory graphics to packaging,’ Smith suggests.

‘In future, packaging will have to work much harder,’ she adds. ‘Cigarettes are unique – there are few products with which consumers interact so many times a day.’

Smoking is under fire from many angles. It will be interesting to see if brands, and particularly premium marques, can survive as advertising and marketing is banned and branding is taken down to its roots on packs.

Interbrand to get a new Edge