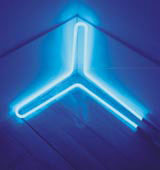 Spatial dynamics are all too often an afterthought in furniture design. Not so for Royal College of Art graduate Martino Gamper, whose Sit Together bench will see him join 11 other finalists at the fifth annual Oxo Peugeot Design Awards ceremony on 3 September, all hoping to walk away with the lion’s share of this year’s £30 000 prize fund.

Evidently inspired by Gerrit Rietveld’s Zig Zag Chair, Sit Together not only incorporates the architecture of its surroundings, a signature of Gamper’s work, it is also a structural masterpiece. Constructed from iroko wood panels, cut to size and mitred together, the absence of a ‘base’ (and presence of logic) would have us believe that such a structure could not possibly stand unsupported, let alone be sat upon. It is only by using the corner, which forms the core strength of the structure, along with a meticulously calculated set of dimensions that the design succeeds.

Describing his style as a ‘combination of the conceptual and functional’, Gamper’s views on how a piece of furniture should be designed lie at the heart of much of his work. ‘Looking at how something works within a space and within its environment rather than just designing a table and then trying to find ways of making it feel new [is important],’ he explains.

Citing the craftsmanship of Enzo Mari and the style of Benjamin Baldwin as key influences, Gamper initially trained as a cabinet-maker in his native Italy, before studying sculpture at the University of Applied Art in Vienna. The move to furniture and product design came later as he headed to Milan to complete an internship with architect and designer Mattheo Thun. What began as a three-month placement ended up lasting two years, but finding Milan both ‘too restrictive and too corporate’, in 1998, Gamper headed to London, and the RCA to undertake an MA in furniture design. Seizing the opportunity to ‘develop ideas I hadn’t been able to explore while working for other people,’ it was at here that his interest in corners first took hold.

Focusing on the ‘corner as a spatial entity’ the designer’s final MA project consisted of eight pieces, each of which interacted with the specific properties of a corner and included a speaker, light and table – and the bench that would eventually become Sit Together. ‘Obviously, if a piece of furniture is freestanding it can really define a space,’ says the designer of his shortlisted entry, ‘but there is also something special about sharing a piece of furniture that I really like.’

This fascination with hidden and unused space has remained the focus of Gamper’s designs and is best exemplified in more recent pieces, such as Totem, a set of stackable shelves in silver-bronze laminate that fit within one another for easy storage and Positive/ Negative, a glass fibre table that slots into itself.

Gamper is also a keen collaborator, having worked with a number of designers across a diverse range of projects. In 2002 a commission from the British Council saw him team up with graphics group AbÃ¤ke to design The Book Corner, a travelling exhibition celebrating recent British publication design, while earlier this year he joined forces with Rainer Spehl for Sotheby’s Waste to Taste exhibition, taking previously discarded objects and recycling them to create one-off pieces. ‘It was very quick and spontaneous, which as a designer I found very liberating,’ he says enthusiastically. ‘We design so many things on paper whereas this was only about assembling and making things.’

As the vogue for mass customisation continues to gain pace, it comes as no surprise to discover interaction as an emergent theme among the finalists for this year’s Oxo Peugeot Design Awards, as the creative baton is passed from designer to consumer for the final leg of its journey. In the Lighting category, interaction with the end user forms an integral part of all three finalists (Dip Lamp, Modpod and Scratch Light), while in Furniture, formal and functional interaction define Ryan McElhinney’s Knot Sofa and Gamper’s Sit Together bench respectively.

Having made it down to the final 12, Gamper could well be the one to walk away with this year’s overall prize of £15 000, but what would an award such as this really mean to the designer? ‘What it would really do is take some of the pressure off and allow me to develop the new ideas that have currently only made it as far as my sketchbooks,’ he says, ‘…and maybe have a pint or two to celebrate.’

The winning work from the Oxo Peugeot Design Awards 2003 will be exhibited at the.gallery@oxo, Oxo Tower Wharf, Bargehouse Street, London SE1 from 4 September until 5 October, before touring nationwide

Bell drops a clanger that is still being picked up