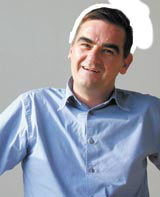 Hiring Jon Edge from Wolff Olins looks like a smart move by Interbrand (see News), which arguably needs a creative standard-bearer following the departures of Marksteen Adamson and John Simmons. But perhaps the most interesting thing about the switch is that it brings someone with experience of creating media-savvy, consumer-facing brands into an identity team.

While at Wolff Olins, Edge worked on directory enquiries brand The Number, whose mustachioed runners – love ’em or hate ’em – have dominated TV screens and billboards this summer. Wolff Olins developed the campaign alongside ad agency WCRS – evidence of the blur between the design and advertising disciplines.

Next week, the Packaging Solutions Advice Group considers whether this kind of ‘total offer’ solution is necessarily a good thing. The motion for debate is that both parties should stick to their knitting.

When times are tough, Acton thinks creative groups diversify ‘in order to keep businesses solvent’. But if designers really want the ‘consultancy status’ they crave, diversification may be ‘the proverbial nail in the coffin’, he says.

‘Surely this can only lead to greater client confusion, promote a lack of industry coherency, undermine fee structures and perhaps more importantly, take the focus away from being able to sell the one thing we tangibly create – business-building ideas?’

He suggests the situation smacks of ‘robbing Peter to pay Paul’, while Barrett ponders the relative standing of design and advertising.

‘In the olden days, designers designed and advertisers advertised,’ she says. ‘But as time went by, design consultancies began to realise their role wasn’t just about brochures and packaging, because in order to create this work effectively, it was important to understand and contribute to the overall context of the brand/ consumer environment.’

Now, consumers expect ‘a complete brand experience’ and it’s not always clear ‘Who’s the Daddy?’ in terms of brand advice.

Barrett adds, ‘[While] both ad agencies and design consultancies have the creativity, skills and the experience to create brand strategy and positioning, the skills required to execute this strategy are quite distinct and discrete.’

She sees creative – and, by implication, financial – value in ‘these specialisms’ remaining separate. ‘Trying to offer [many] services from under one roof just isn’t credible for clients – it really is a case of being a Jack of all trades and a master of none, and that doesn’t do anyone any good,’ she says.

The Chase marketing and strategy manager Simon Farrell generally agrees with the notion that the best design and advertising does come from industry experts, but that doesn’t preclude cross- competence. ‘The reason is that the best of both worlds come from strong, single-minded ideas,’ he explains.

But a better argument in favour of creative multi-tasking is the fact that once you’re ‘under the skin’ of a client, it’s much easier for one creative group to translate the brand vision across the range of applications.

To support the PSAG motion, moreover, you need to believe there’s a point ‘when design stops and advertising starts,’ Farrell says. And that’s not easy if you think ‘good design is communication, not decoration, and therefore as much about communicating a brand’s proposition as any advertising [campaign].’

Alistair Sim, managing director of Manchester-based Love, is ‘always committed to thinking big’ and positively relishes the challenge of finding an answer to the ‘old adage, “What’s your problem?” – as in Michael Johnson’s book, Problem Solved’, regardless of what the creative output might actually be.

‘Like the whole “creatives and suits” debate, which is dead, distinctions between advertising and design are old hat,’ he says. ‘Rate of increase [ROI] is clients’ favourite phrase at the moment and I don’t see any limits, within reason, on what it’s possible for a creative business to do. We’re selling common sense.’

Though he acknowledges this is a ‘high risk strategy’, design groups can only expect to survive as ‘ideas-based businesses’ if they embrace change. And that means constant reinvention – ‘the David Bowie effect’, he argues, of ‘always having something new to say’.

No One does it better?

Founded by David Law (ex-Coley Porter Bell) and Simon Manchipp (ex-Identica), No One aims to offer ‘design brains in an advertising body’. Quite literally, as it shares office space with ad agency HHCL/ RedCell.

‘It’s like being at art school,’ says Manchipp. ‘It’s almost impossible not to find inspiration from something amazing that’s happening a couple of desks away. [But] all projects start with one designer and one client [and] we build bespoke teams from there.’

Manchipp says design and advertising are ‘fragments of the same stone’, but the real benefit of combining their roles lies in removing ‘the designer’s blinkered, detail-obsessed viewpoint [and] the adman’s swagger’.

Specialists are still specialists, but the bigger picture is clearer as a result, he suggests. ‘The client goes away with one catchy idea firmly planted in its head.’