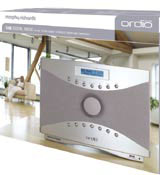 Project Advertising and Design has created packaging and a name for Morphy Richard’s latest range of radios, as the company moves to target a ‘young, stylish and image-conscious’ market.

The range of five digital and analogue radios, called Ordio, will hit the shelves in October.

Morphy Richards product group manager Nick Richards says the group was briefed to develop a ‘modern, contemporary look that would communicate lifestyle and reflect the value of the products’.

For the digital radios the consultancy commissioned photographs of a loft apartment in Manchester to give lifestyle appeal.

‘We also used good quality, contemporary typography and metallic and powder blue [background colours] that linked with the products,’ he adds.

Lifestyle photography was not used on packaging for the analogue radios, but the design features some elements that are similar to the digital range to deliver consistency.

Project was appointed without a pitch last July on the basis of a long-standing relationship with Morphy Richards. Smithers was creative lead on the project.