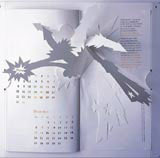 I was both surprised and angry at the responses given to your Vox Pop question of designers to the Trickett & Webb announcement of closure (DW 21 August).

It really was a case of designer cattiness in some instances and without a word of praise for the standard-setting work (example pictured) of a much-honoured design consultancy.

If self-publicity is the way to success and succession, then it has shown great ingenuity and responsibility in its approach to the subject. The calendar published each year showcased illustrator talent against often exciting new design directions – demonstrating the ability of engaged professionals in helping others as well as themselves to publicise. Awards came thick and fast and that too is a standard requirement in our industry for qualified publicity.

Both Brian Webb and Lynn Trickett have given much to the design community here in the UK and to be told they should not have used their names 32 years ago is a rather smug response to a serious question – made very much easier with hindsight.

For me a word of their pioneering spirit and a little understanding of the climate, position and style that existed when they set up would have been a kinder precursor to the advice given against a background of today’s environment.

Imagine 32 years hence when the one-word design group names are closing down and someone suggesting that using the founder’s names might have been a good idea.

It seems to have worked for Raymond Loewy, Walter Landor and Philippe Starck, among others.