Pearlfisher has unveiled a new brand for Consider Pastures, a company that specialises in “humanely-raised, organic and free-range” eggs.

Founded on the basis of sustainable farming, the company says it offers the “gold standard” in the world of eggs. Its focus on sourcing from small family-run farms and pasture-raised environments allows hens to “roam and behave naturally”, it adds.

The work has been done by Pearlfisher’s New York office, with the project extending to brand strategy and design, as well as packaging. The idea was to “establish a more emotive connection” with consumers, in comparison to competitors, the studio says.

Christian Bird, the studio’s creative director, says Pearlfisher was approached for the project because of its proven track record of “creating desirable and conscious brands capable of cutting through categories and culture”. 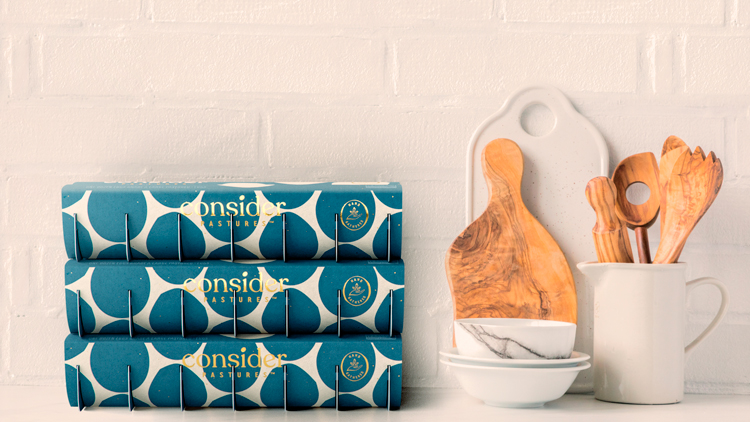 The brief was relatively open for the team, Bird continues. “The client knew from the outset that they wanted a unique brand experience and they gave us the freedom to deliver on that expectation,” he says.

One of the most significant elements of the design work is the egg carton itself. Kitman Leung, design director at the studio, says the revival and adaptation of the classic packaging solution showcases Consider Pastures’ “commitment to doing things in an elegant and choiceful way”.

The packaging is adorned with a geometric egg pattern on the top of the pack, and this is carried through to the side panels too. The pattern work is designed to celebrate the “naturally large and imperfect shape of the egg”, according to Leung.

Additionally, when stacked on a supermarket shelf the continuous pattern creates a “wallpaper-like” effect, she says. This was done so that the product would “feel fit for the home rather than allowing category expectations to dictate design,” according to Bird.

“The design features an egg pattern, which you might expect to find on kitchenware and textiles, but it fits perfectly with the vintage carton packaging,” he adds. 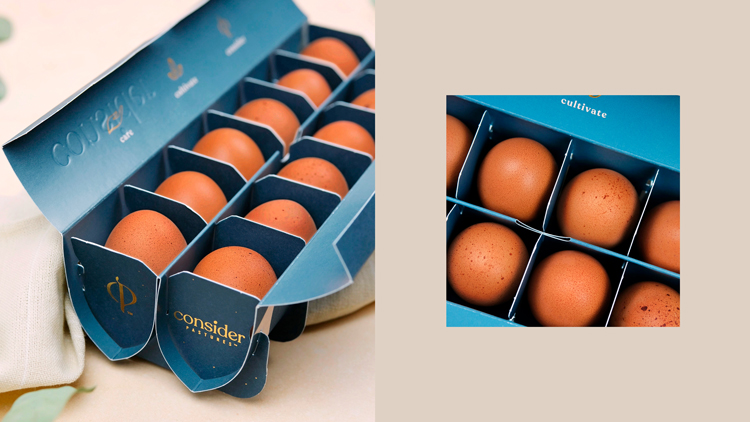 The new Consider Pastures monogram is made up of a stylised C and P and the icon is inspired by Phi, the studio says. Phi is the 21st letter of the Greek alphabet and as a symbol is commonly used in mathematics and science as a reference to the “golden ratio”.

As Pearlfisher puts it, the golden ratio “suggests that the brilliance and infinite detail that naturally occurs in nature is the idea standard for beauty”. The monogram is accompanied by a set of similar icons which represent other facets of the business like “care” and “cultivate”.

On pack and in communications, the monogram appears in gold while the wider brand uses a palette of blues and white. This warm scheme of colours, as well as “discoverable details” found elsewhere in the packaging design, “enable the design to go deeper than the surface”, the studio says.

The gold has particular significance, Bird says. “[The] golden symbols represent the uncompromising standards the hens are raised with – open natural spaces, quality feed and more,” he says. 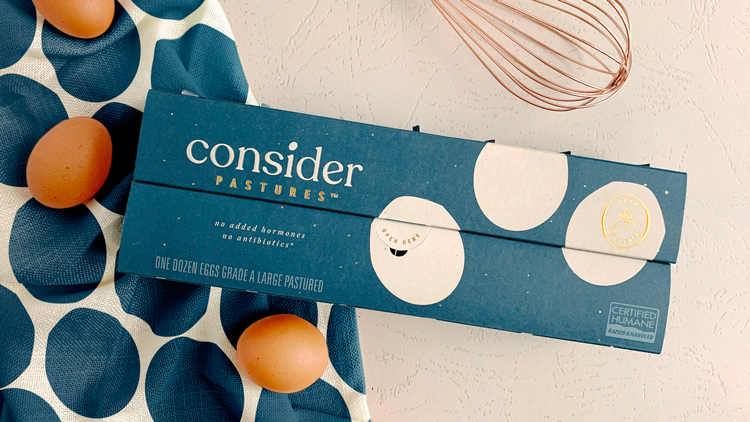 The studio says the monogram, as well as the “hand-gathered” seal and embossed messaging highlight the “hand-crafted” approach that Consider Pastures employs for raising and sourcing eggs.

The sum is something that marks Consider Pastures out from the wider “conservative egg category”, according to Bird.

“We were able to tell this story through the layers of the brand design,” he says. “Overall, the design really shines on-shelf with the egg pattern working to great affect – less of an ‘egg’ carton, more ‘gift’ box.” 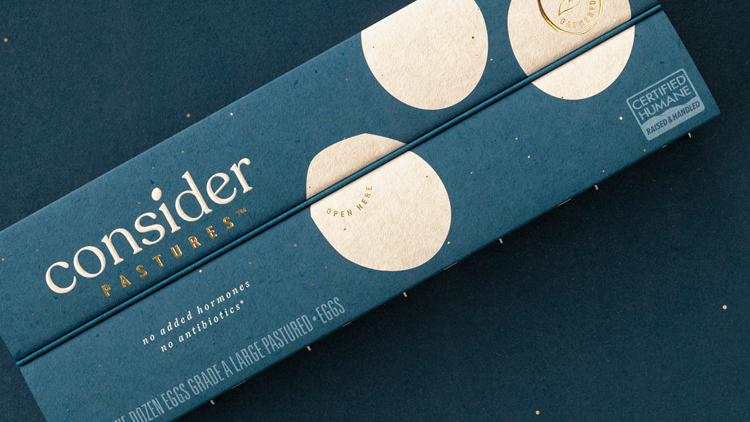 What do you think of Consider Pastures’ branding? Let us know in the comments below…