Many books on logos pass over the Design Week desks but this one really stood out. As well as pulling out some classic examples, it can be used as a compendium of best practice. Steven Heller and Gail Anderson, examine some of the world’s most “iconic brands” from eBay to Lego. The authors dissect 50 brands in total, including Obama’s 2008 presidential campaign logo and Amazon’s “corporate happy face”.

Heller and Anderson examine the arrows, swooshes, letters, shapes and pictures to work out what makes a logo great, and how graphic design can convey a company’s “philosophy”. Whether for a museum or medicinal company, the logos all have one thing in common: they’re excellent examples of “representation, reputation and identification”.

The book is split into sections, from personality-filled lettering to “memorable monograms”. One chapter looks at “secret signs” of logos, which include the hidden arrow in FedEx’s branding as well as an optical illusion in the designs for the 1968 Mexico Olympics.

When: Available to buy now.

Info: The Logo Design Idea Book is published by Laurence Kind, and costs £12.99.

Event: Wish You Were Here

Chichester has long been a hive of creativity, which is no surprise given its picturesque surroundings on the British south coast. Design Collective Chichester, a group of 200 creative professionals based in the area, has designed 54 postcards inspired by the surroundings, from the famed dunes of West Wittering to the sprawling South Downs. The group has also brought attention to less well-known places like the ancient forest at Kingley Vale and the modern Chichester library. Illustrator Chloe Robertson has created a map for the area.

The designs will be launched at a free event at Pallant House, where visitors will be able to write their own messages and post the cards. The summer evening event also serves as a celebration of local creative talent, including digital designers, architects and illustrators. There are five speakers, including Design Business Association chief executive, Deborah Dawton who is talking about the importance of freelancers in the design industry. Emily Penny, the event’s co-creator says that the event aims to “build awareness of the diverse range of expertise available locally”.

The gallery’s current exhibition, Ivon Hitchens: Space through Colour, will be open to view as well for £5.50. Modern artist Hitchens painted from his home in Sussex, and is celebrated for his progressive style during the 1920s and ‘30s. Later in his life he spent more time on the coast at Selsey — another area depicted on the postcards.

Info: Entry to the exhibition is free, and a programme of events is available here.

Tate Modern brings together the first UK exhibition based on the work of Hungarian artist, Dóra Maurer. Famed for her avant-garde work from the 1970s, Maurer was among a community of artists, poets and musicians who covertly championed their own art during the socialist regime, organising secretive exhibitions in apartments and producing under-the-radar journals.

Having trained as a graphic artist in the 1950s, Maurer began working with photography and moving image in the following decades. Over her 50-year career, she would combine these techniques and push the boundaries of each medium. Developing both an abstract and geometric style, Maurer worked with drawings and paintings in her later career, with a constant focus on mathematical processes.

The exhibition tracks this development and follows Maurer unique voice until a final room where “colours create a sense of shapes floating in space”, according to Tate. It highlights the diversity of Maurer’s work, with its themes of movement, displacement and transformation. Fittingly, it is almost impossible to pin her idiosyncratic voice down — Maurer’s work does not dictate, rather it presents viewers with options.

Info: Tickets to the exhibition are free. 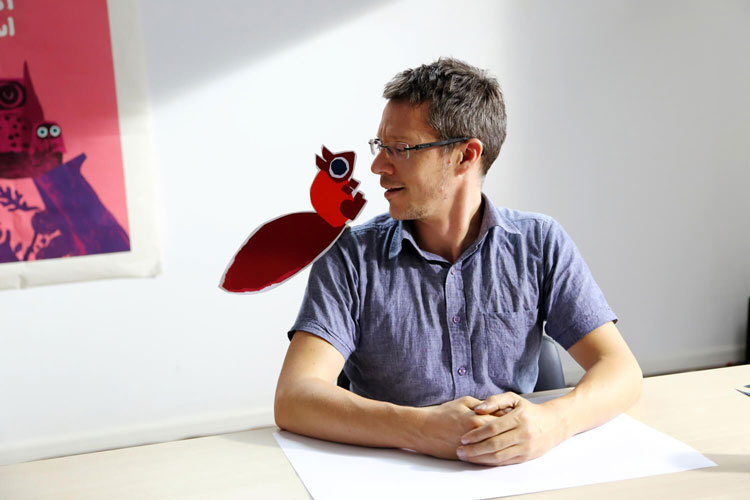 Award-winning book illustrator Chris Haughton will be discussing his innovative approach to multimedia work for children. Haughton’s debut title, A Bit Lost — a picture book about a lost owl — has been published into 21 languages across the world. His two follow-up books both won awards.

Haughton’s style is adaptable. He uses illustration for apps, animations and Virtual Reality (VR) games in an effort both to entertain and educate. His recent VR projects, Little Earth VR and Message Antarctica help children to understand the world around them; from scientific and natural processes to the climate crisis. After the talk, Haughton will be signing copies of his new book, Don’t Worry Little Crab.

Fittingly, Haughton’s discussion touches on themes relevant to the gallery’s current display, Marie Neurath: Picturing Science. Neurath was a pioneer in conveying information through graphic design, with a focus on educating children through illustration. Ticket holders to the talk will be able to see the exhibition at an after-hours private viewing.

Now in its second year, Stockholm’s Summer Design Week transforms the Swedish capital into a haven for creatively-minded people. The city — whose branding was a focus of a 2017 exhibition in London — hosts design-focused events, exhibitions and talks during the third week in August.

At the Museum of Graphic Arts, there is an exhibition of Swedish illustrator Jane Barks, whose 50 year career spans fashion drawings from 1960s Paris to hundreds of weekly portraits Bark produced for the Stockholm-based magazine Fokus in the 2000s. Gallery Sebastian Schildt is hosting an installation of artist Ann Wolff’s eleven giant-sized glass sculptures, with a semi-transparent staircase as its centrepiece.

At the Embassy of the Netherlands, designers Isa Andersson (from Sweden) and Rick Tegelaar (from the Netherlands) are sharing experiences from their respective careers. The format is formed around a series of questions, from which deeper discussions about design follow. There is also a travelling installation of fashion designer, Raf Simons and two exhibitions at the Museum of Furniture Studies; one celebrating the 100th year of the Bauhaus movement, and the second highlighting the 1980s Memphis Design Movement.

Where: Events take place across Stockholm.

Info: A calendar of events can be found here.