The GeoDataViz exhibition can be viewed on computers and is a “perfect blend of Ordnance Survey’s art and science”, the company says.

Users move around the virtual space and can view displays, curated by OS.

These include visualisations of Britain’s favourite walking routes as well as a one-off map of Mars, created using NASA open data. A recent anniversary map of the 1969 moon landing is also on display.

One exhibit, entitled The 92, shows the mapping of the UK’s 92 football league grounds, ordered by stadium capacity.

When users approach a map, they can click to learn more information about the display, like reading a caption at a museum.

It is also possible to buy some of the maps at the exhibition, directly from the online OS shop. 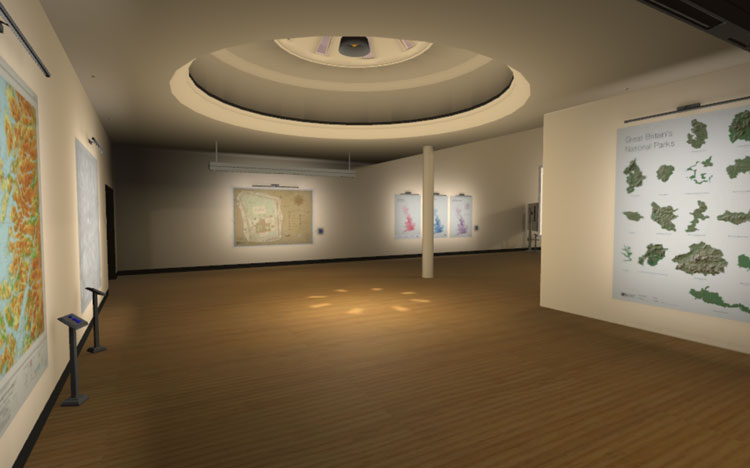 The concept originally emerged as an experiment with virtual reality headsets, according to Guy Heathcote, product development consultant at OS.

Running on the Unity game engine, the system looks to “combine diverse media in an intuitive and memorable way,” Heathcote says.

The exhibition has been organised by cartographic design consultants Charley Glynn and Paul Naylor.

Naylor says that they wanted to “replicate the look and feel of an art gallery, so visitors can enjoy everything at their own pace”.

The current space is intended to be a launchpad for more virtual expansion.

“Over time we will be adding new artwork to the gallery and opening up the other rooms to exhibit the work of other artists,” Naylor says.

“As well as showcasing this year’s entries to the OS Awards, we are also planning on showcasing other leading cartographic and data visualisation experts as guest exhibitors in the rooms that are currently locked,” he says. 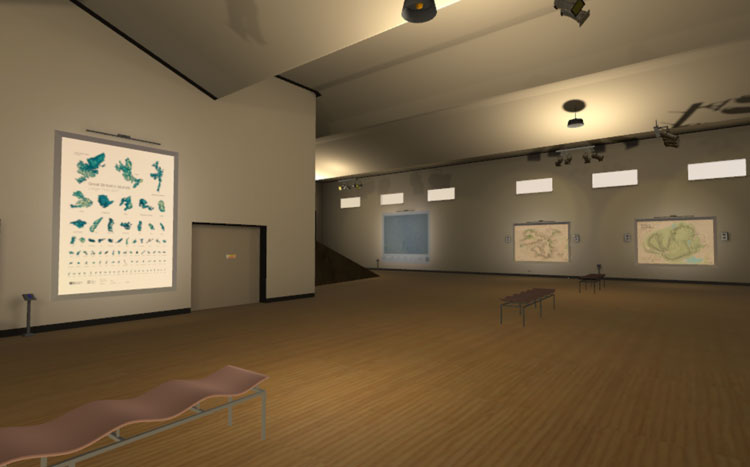 In an effort to create an interactive space, OS has also incorporated sound into the experience.

There are two collaborations with composer Ewan Campbell, who says that music and cartography “both use two-dimensional visualisations to represent something which is multi-dimensional”.

When users approach the two maps — whose contour lines are made up of the five lines of a musical stave — original compositions by Campbell play.

In 2015 the mapping service rebranded as OS. The gallery can be accessed here.