Government Communication Headquarters (GCHQ) was only formally recognised in law in 1994, but its influence runs deep through British history.

The intelligence, security and cyber agency has worked with MI5 and MI6 during key events in the past century — from Cold War Britain to the WannaCry cyber virus that plagued the NHS in 2017.

This year, GCHQ celebrates its 100th anniversary and to mark the occasion, it has collaborated with the Science Museum to reveal objects from its secretive history.

The often-mysterious nature of the displays informs the exhibition’s design from the beginning; visitors enter the exhibition through a brightly lit and industrial corridor.

The aim was to make visitors feel like they are stepping into a “secret world — one they wouldn’t normally be inside”, according to the exhibition’s manager, Hannah Daley.

As they pass through the corridor — which is made from translucent polycarbonate — visitors cast shadows, which people who are already in the exhibition space can see.

This dual sense of perspective sets the tone for the exhibition, where visitors are encouraged to think about what they can and cannot see, and what might be hidden from view.

At the end of the entrance corridor there is an illegible graphic on the floor. Only by looking at the cylindrical mirror above it, does the graphic “resolve itself”, Daley says. Visitors can then read the exhibition’s tagline: “From ciphers to cyber security.”

Once inside, another graphic, printed on a zig-zag wall cannot be read until visitors move around and view it from a specific angle, at which point the exhibition’s title becomes clear.

“We wanted to put unrelatable objects in relatable environments”

It was not always easy to curate an exhibition around its objects — especially when they were not “pretty”, the exhibition designer, Andrés Ros Soto says.

Soto says that “you need to convince visitors to spend time with displays” when the items are not “beautiful in an objective way”.

The first section follows the organisation from its beginning to the 1980s. These are displayed as “historical showcases” which aim to “evoke a sense of time and place”, Soto says.

One display focuses on the Krogers, who were part of the most successful Soviet spy ring in Cold War Britain until their arrest in the 1960s.

The network — five were arrested but more were suspected to have been part of the ring — relayed information about the Royal Navy’s equipment testing for marine warfare.

Two of the group’s members, Peter and Helen Kroger, lived in Ruislip, Middlesex. Soto created a “super chintzy and suburban” display for this section, in an attempt to recreate the feel of the Krogers’ home.

Visitors walk through a 1960s-themed room, complete with floral wallpaper and puce carpet, while looking at the encryption technology used by the spies.
This design was all about creating a context for the technology.

The historical section also explores the Zeppelin raids, and how radio triangulation was used to find the airships as they flew over Britain during WWI.

Soto has based a ply-wood design of the Zeppelin on a description of a boy’s account of watching a Zeppelin crash and burn.

The contemporary section looks at cyber security and the way that online communications affect our everyday lives.

Soto wanted to “ground” these “less tangible concepts” in a physical setting.

In an attempt to create a “sense of transparency”, acrylic casements were used to display the objects.

All the cabling for the audio-visual section, for example — which include debates about intelligence agencies and animation about pubic key encryption — is exposed.

“We wanted people to be able to look at the inner working of things, as well as think about how information is transferred,” Soto says.

Included in this section are cables that ran under the Atlantic Ocean joining Britain and the US, Margaret Thatcher’s secure briefcase telephone used during the Falklands war, as well as a Facebook server.

There is also a computer that has been infected with the WannaCry virus, the ransomware which caused a crisis for the NHS and cost the health service £92 million.

The displays are backlit in a gradient of colours — including blue and green shades, as well as pink and yellow hues — which is a deliberate resistance of expectations.

“It would have been easy to fall into the trap of it seeming like an oppressive interrogation room,” Soto says. “We wanted the design to be completely the opposite of what visitors expected.”

An interactive section that highlights the “essence of code breaking” 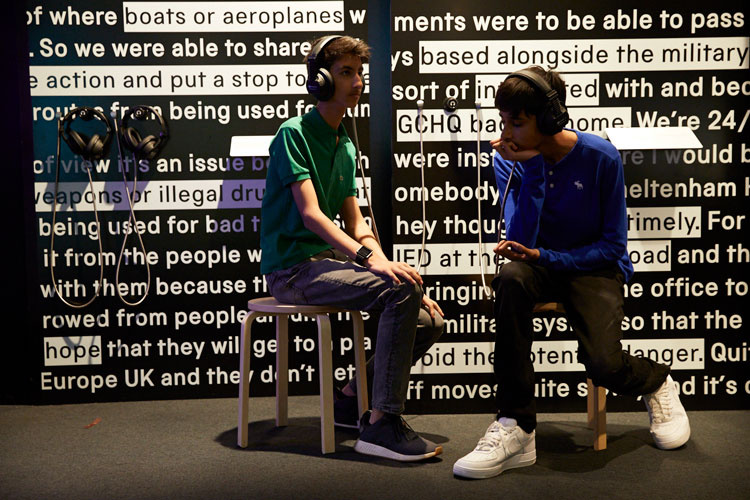 Daley says that the exhibition looks to “inspire people to be interested in secret communications, and how that might fill a skills gap in the future”.

This is the aim of the interaction puzzle zone, which tests out visitors’ code-breaking skills, such as “language skills, spot patterns and basic encryption technology.”

There is also an emphasis on analogue skills; “digital wizardry” has been purposefully avoided in an effort to show the “essence of code breaking”.

“A large part of GCHQ is being persistent and not just one piece of intelligence — it’s about iterating,” Daley says.

There is a locked puzzle box, with 10,000 possible combinations. So far, none of the 25,000 visitors have guessed the code, but they have started to leave messages of codes they have tried out.

“Even the dust is classified”

Soto’s favourite display might be the last — a pot of dust, which is classified waste from GCHQ.

“GCHQ grinds down everything that is classified, which generates dust,” Soto says. “Even the dust is classified — when you look closer, you see it’s not only paper but machinery and circuitry.”

The dust has been collected in a resin container, resembling a petri dish, which has been backlit and attached to the wall to look like a porthole — as though encouraging visitors to look through it.

It is a final act of openness and concealment, Soto says.

“There’s still so much information that is unknown about GCHQ,” Soto says. “Even though this is their most revealing moment, the exhibition leaves you with an open question.”

Top Secret: From ciphers to cyber security runs until 23 February 2020 at the Science museum, Exhibition Road, South Kensington, London SW7 2DD. Tickets are free and can be booked online or in the museum.