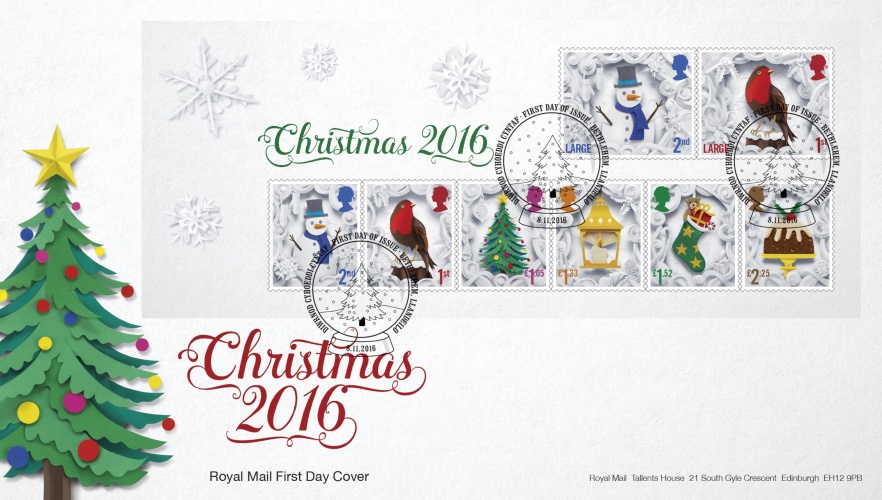 This month marks the 50th anniversary of Royal Mail’s annual Christmas stamp collection. Since then it has released 229 Christmas Special stamp designs, with more than 17 billion stamps being printed to date.

Common recurring themes from the last five decades have included everything from angels and churches to animals and the arts.

To celebrate 50 years of festive-themed stamps, we’ve selected our favourite stamp design from each decade.

The designs for the UK’s first ever Christmas stamps came about as a result of a competition held by children’s TV show, Blue Peter.

After the competition was announced by postmaster general, Tony Benn, eight professional stamp designers judged more than 5,000 entries and awarded the winning prize to Tasveer Shemza and James Berry, both aged six.

Children’s designs have only been used on Christmas stamps twice since then; once in 1981 and more recently in 2013.

Designed by Fritz Wegner, this stamp depicts the Three Wise Men riding horses on their way to see the birth of Jesus.

Wegner, who was a visiting lecturer at Central St. Martin’s for 25 years from the late 1960s, was known for using rich detail in his illustrations, which can be seen from the swirling landscape and purple backdrop.

London-based graphic design consultancy, Trickett & Webb, opted to add a modern twist to the traditional nativity scene in this design, depicting it on the front of a Christmas card that sits on a mantelpiece alongside other festive-themed greetings cards.

The pop-art style purple and blue illustrations were designed by RCA graduate Andrew Davidson, with photography by Lucinda Lambton.

Best known for illustrating Roald Dahl’s children’s books, Quentin Blake was commissioned to design this stamp collection celebrating the 150th anniversary of the publication of A Christmas Carol.

After a 30-year hiatus since the publication of the Father Christmas picture book, cartoonist Raymond Briggs resurrected his character for a nostalgic festive stamp collection commissioned by Jane Ryan, head of design at Royal Mail Stamps.

Taking the weather as the theme, Briggs depicts the portly present-bearer battling the elements on his Christmas Eve delivery round, along with his reindeer helpers.

To celebrate the 50th anniversary of its Christmas stamp collection this year, Royal Mail has commissioned The Chase to design a set of six stamps which celebrate festive traditions such as decorating the Christmas tree and making a snowman.

All of the stamps – including this one of a robin redbreast – have been illustrated by Manchester-based Helen Musselwhite, who created intricate paper sculptures which were then photographed to go on the stamps.

The robin red-breast design is inspired by the red coats worn by postmen in Victorian times, who were known as red-breasts.

You can see all of the Christmas Special Stamps from the last 50 years on the Royal Mail site.