A new play kit that allows children to create their own toys out of almost anything has been launched on Kickstarter.

Toyi allows any child to become a “toy designer”, according to its makers and aims to make play accessible to children around the world, regardless of their circumstances.

The play kit, which consists of a variety of connecting and small parts, comes with no instructions or rules, leaving it up to the child to decide what they want to make and how they want to play.

The different pieces can be attached to any object to transform it into a toy, allowing anything from a cereal box to an empty bottle to become a plaything.

Toyi is a social enterprise based in Istanbul, Turkey, founded by Elif Atmaca and Ögeday Uçurum. It partnered with design studio Atölye on the project.

The creators hope that Toyi will encourage creativity in children, as it is “limitless” in what they can make.

Atmaca says: “They can turn a water bottle into a rocket, an old box into a train compartment or a pine cone into a cute monster. Children can design their toys on their own or with their friends and improve their creativity by making their dream toys come to life.”

Rather than providing instructions on how to make things, the kit encourages free, “child-led” play, Atmaca says, that does not need to be dictated by adults.

She adds that adults’ creativity is generally limited compared to that of children, but it is grown-ups who usually set the rules on play. She adds that many existing construction kits provide images of the final product that kids are expected to make.

Instead, Toyi leaves the entire process open-ended and down to children’s imagination.

Atmaca says: “Toyi is designed not only to ensure that children will not lose their creativity as they grow up, but also to enable them to develop many skills that they need in this century. As children redesign the materials around them, they acquire the upcycling instinct by producing without consuming in their early ages.”

Each kit includes feet, hands, wheels, eyes, joints, sticks and flexible connectors in a range of bright colours, which have been chosen to be “genderless”. The kits are aimed at children aged six and over, of all genders, ethnicities and cultural backgrounds.

The parts are made of acrylonitrile butadiene styrene (ABS) and elastomer, designed to be “long-lasting, safe and provide a joy on every snap”.

The Toyi logo, a wordmark set over two lines in four colours with the “I” and “O” in “Toyi” connecting to form a lowercase, dotted “i”, has been designed by Emre Parlak, a graphic designer based in Istanbul.

Atmaca says the logo has been “inspired by the basic geometric shapes of the toy parts”. “It is an inclusive, colourful, warm and friendly identity,” she says.

Atmaca was inspired to create a play kit which allows children to make their own toys as she wanted to make it easier for children who may not have access to toys due to their life circumstances to play.

“I believe, the incentive of designing Toyi began to develop when I was a little child,” she says. “Because I spent my childhood mostly in disadvantaged areas of Turkey, I witnessed and experienced how many children don’t have access to toys or even quality play time.

“Especially in regions with many disadvantaged children, it is hard to send them the desired toys,” she adds. “So I thought I should make something that allows these children to transform the materials around them into toys.”

For every Toyi kit bought through the Kickstarter crowdfunding campaign, another will be given to a disadvantaged child. This will be done through partnerships with non-governmental organisations (NGOs) around the world, according to Atmaca, with priority given to “children in extreme poverty or refugee camps”.

Organisations Toyi will work with include Mulham Team in Lebanon, Beirut; El Sistema Greece and Letter of Loves, who will work with refugee camps in Athens, Greece; and organisations working with the Rohingya Refugee Camp in New Delhi, India, among others.

Toyi has spoken to each NGO to see how many kits they estimate they will need and plan to give out following the Kickstarter campaign, with logistical costs covered by Toyi. The NGOs will then organise play events or workshops in their respective areas, after which the children will be gifted a Toyi kit.

Toyi is now available to back on Kickstarter, and needs to reach a funding target of £15,333 by 5 December 2018 to go into production. To pledge money and for more information, head here. 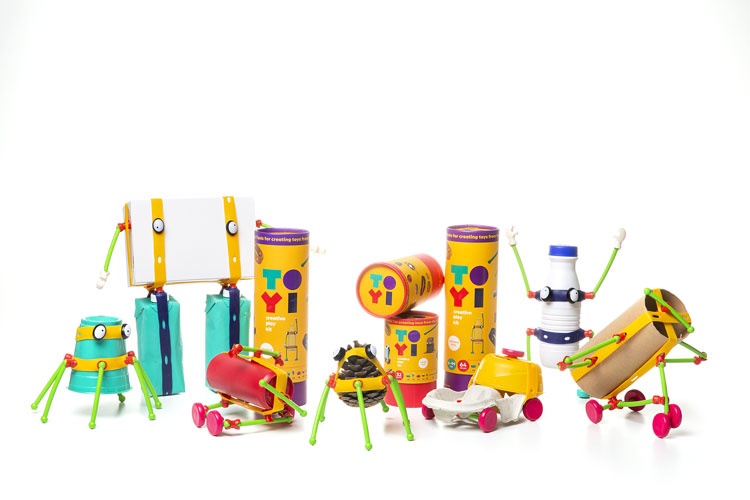 From periods to depression: how design can help us talk about taboo topics