Illustrator Ben Tallon has announced the release of his next book, which will shine a spotlight on the everyday and often bizarre objects found on British streets.

Ya Mum and Other Stories from the Backstreets of Britain is an anthology of 21 short stories. Each one is inspired by a “weird and wonderful” item found on the street. Subject matter ranges from the likes of “an ominous single shoe on a Sunday morning”, to “a half-crushed beer can in the park”, according to Tallon.

The title will be self-published by Tallon later this month. It has been illustrated by him and designed in partnership with his wife Laura Tallon, who is a graphic designer. 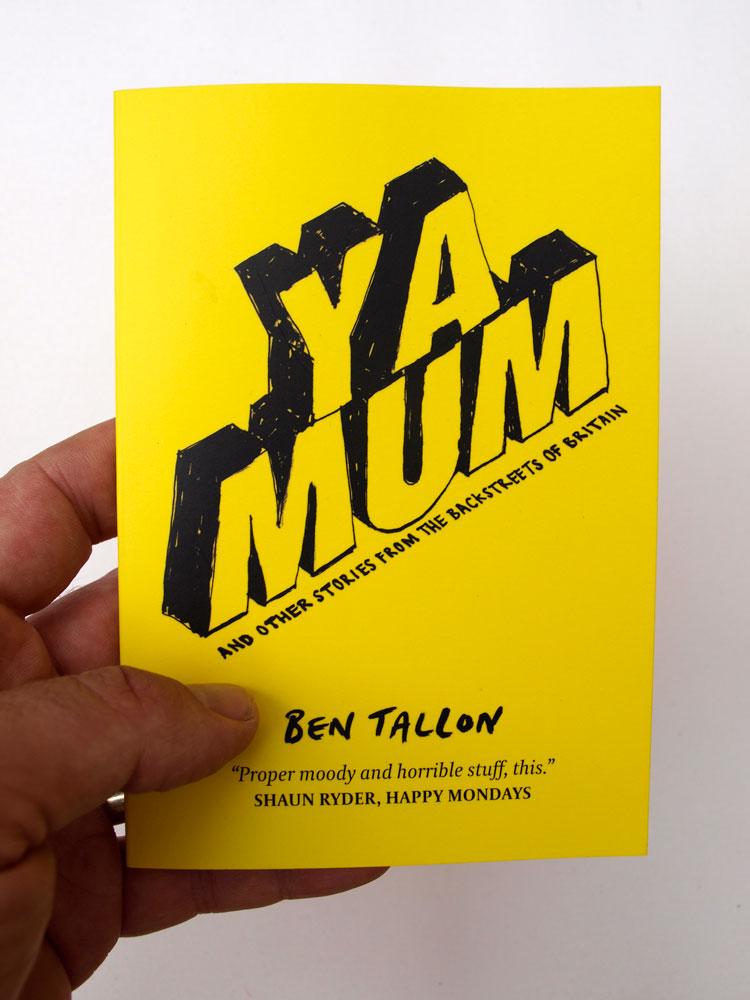 “It felt wrong to release just the artwork”

Ya Mum is Tallon’s third book. It follows his 2015 writing debut Champagne and Wax Crayons, and his first piece of fiction Isolation Watch, which was written and released earlier this year. Tallon describes this newest work as “faction” – a mix of fiction and fact.

Like Isolation Watch, the book was compiled during lockdown, though he says the idea had been developing for a while.

“It began with a WhatsApp ground between me and a friend, in which we would share all the weird things we found in the street,” he tells Design Week. “Somewhere along the way he suggested I start drawing the pictures we took in my style.”

“I started writing these little ‘faction’ stories alongside my illustrations and it dawned on me that it felt wrong to release just the artwork into the world and leave it there,” he says. 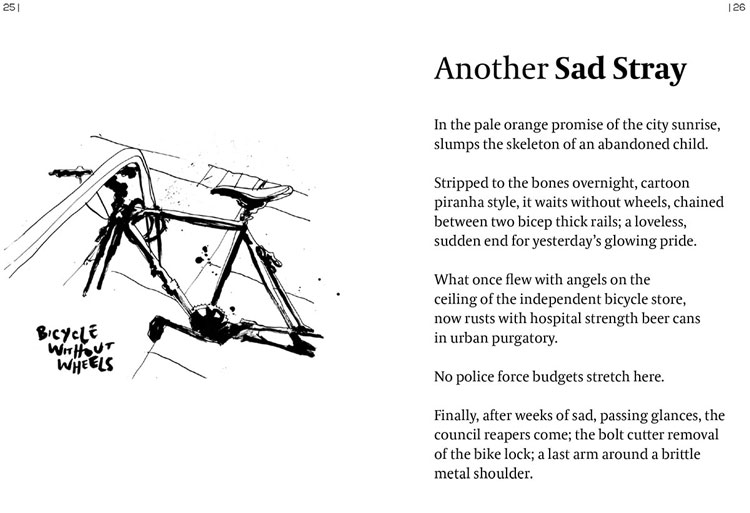 “It’s not something we like to broadcast about British culture”

The motivation for highlighting these objects, Tallon says, comes from the fact they are a “part of British subculture” that doesn’t often get spotlighted.

“We’re all very accustomed to seeing these things, but we never talk about it outside of our little tight-knit groups,” he says. “It’s not something we like to broadcast about British culture, but it’s something I’ve always secretly loved, having grown up in working class towns.”

Coming into the world post-lockdown, Tallon also says the book and its subjects have a renewed significance. Many people, after all, will have spent the majority of the last six months indoors, and away from the average British street goings on.

One thing he is sure to steer clear from, he adds, is judgement. The short stories are not necessarily always about the object, which is really a jumping off point for Tallon’s signature mix of black comedy and sentimentalism.

“We all know that a lot of the time, the stuff to be found on the streets is bad and quite horrible, but they are a part of our streets and this is what I wanted to explore in an objective way,” he says. 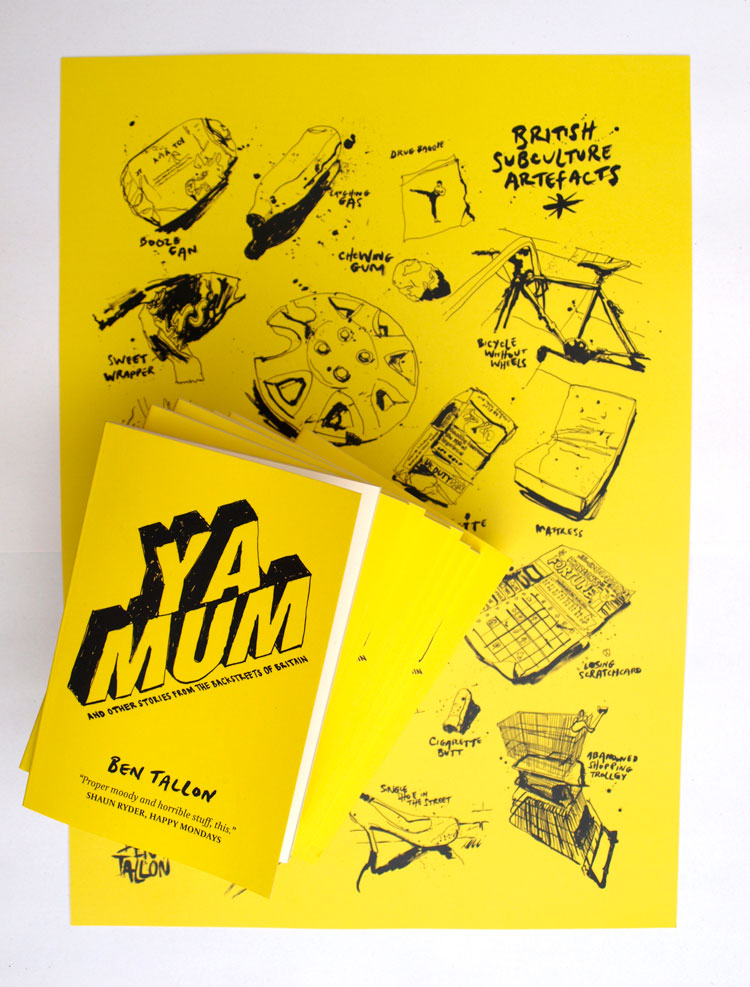 While the book is his third and he has previously written a column for Design Week, Tallon considers himself to still be at the beginning of his writing venture. As it turns out, he says the two practices “feed into each other”. He says: “Much like my illustration, my writing is very raw and instinctive.”

Creating the stories for each object was a challenge, but the bigger still was knowing exactly what to do with this newly accepted love of writing.

“It’s very strange, but also quite welcome, to be back at the start of something new,” he says. “It felt like a ‘hello, old friend’, kind of moment when I was met with the same feelings of uncertainty at the start of this project as I had dealt with in my early illustration career.”

Like so many others, Tallon recalls his early illustration career was touched by feelings of insecurity. But while these feelings were naturally present during this new venture, this time around he says his 12 years’ experience as a professional illustrator helped to stave the large part of it off. 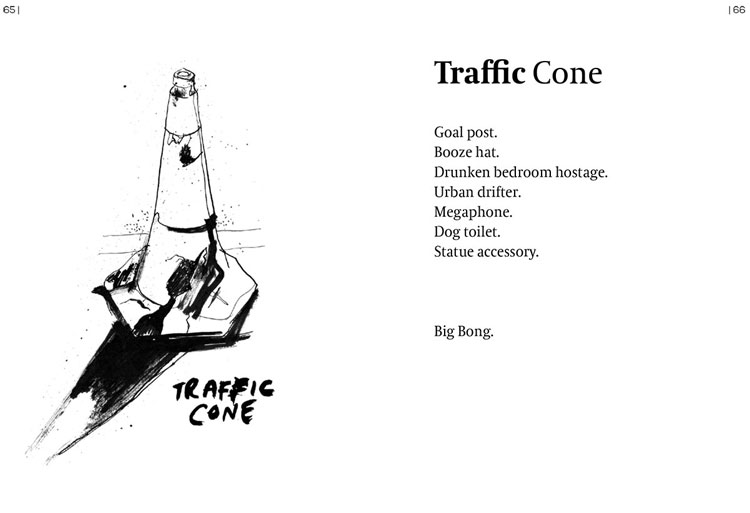 “I respect my abilities and know where they end”

This is Tallon’s first self-published book – his debut novel was released via a traditional book deal with a boutique publisher based in London. While the experience had its positives, Tallon says there were “too many downs” to make him want to follow this avenue again.

With the help of fellow writer Nick Asbury, he began to explore the world of self-publishing and in partnership his wife, he put the book together. The text too, has been edited by the editor of his first book.

The brief Tallon gave Laura was simple: make it look like a “proper book”. Rather than giving a preference to the illustration or text, he wanted both to work in harmony on the page. The design is stripped back, in black and white. Tallon’s illustrations sit alongside more traditional type – he wanted, he says, to “divorce” his style from the typography.

“I’m not a graphic designer – I can appreciate good design when I see it but I don’t have the nuts and bolts in my toolkit to do that,” he says. “It was nice to be able to hand over this body of work to Laura.”

“I think throughout your career you learn more about your own circle of competence which is why I’ve involved others who know what they’re doing,” he says. “I respect my abilities and know where they end.”

Ya Mum and Other Stories from the Backstreets of Britain will be released on 22 October. To buy it or find more information, head here.