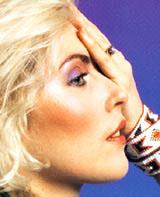 Girls just want to have fun from 6 April until 5 May, focuses on Tatyana Murray’s striking sculptures of Perspex, hydrocal, varnishes and resin.

Music photographer Mick Rock brings together his work from 1972-77 at the exhibition Blood & Glitter, from 5 April until 6 May. The book, of the same name, by Mick Rock, is published on 11 April by Vision On.

Spectrum, the first show in a series on colour from design consultancy Johnson Turnbull, focuses on the creative energy of founders Chris Turnbull and Steve Johnson, from 6-13 April.

Recent images from the Hubble Space Telescope feature at Hubble’s Universe until 12 May.

Brazil Incarnate and Faith, from 2-21 April, is an exhibition package exploring two controversial themes through photography. Christopher Pillitz looks at the sexuality of Brazil and Mike Abrahams examines Christianity.

Enterprise IG identity for the CBI