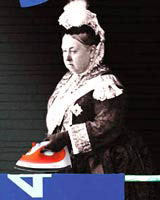 The campaign runs exclusively on Tube cards for two months from 1 April.

The exhibition examines the many paradoxes of the Victorian era and the advertising has been designed to appeal to a broad audience to avoid attracting just the traditional V&A enthusiasts. Each concept links Queen Victoria in a light-hearted manner with modern inventions.