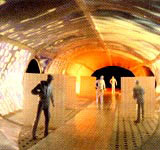 Event Communications has been chosen by the Victoria & Albert Museum to design its Radical Fashion exhibition. Johnson Banks will create promotional literature for the British Galleries, which open in November.

The news comes as museum design heads predict an increase in the use of external design groups within the museums and galleries sector.

V&A director of major projects Gwyn Miles says the museum is increasingly looking outside for designers to give its work something “distinctively different”.

According to Science Museum head of design Tim Molloy, the days of large, internal design resources at museums are numbered. “Commissioning external designers, in particular non-exhibition specialists, for our projects is becoming increasingly important as the competition hots up,” he says.

Radical Fashion, which runs at the V&A from 18 October to 6 January 2002, will showcase the work of cutting-edge fashion designers, such as Alexander McQueen and Issey Miyake.

Johnson Banks will design all marketing and press material for the museum’s British Galleries, and its brief may include creating a marketing identity, says a V&A spokeswoman.

The consultancy joins Casson Mann, creating the individual galleries, and Rose-Innes Associates, which is working on all graphic design within the galleries.

Johnson Banks was appointed from a shortlist of seven. The project is one of the biggest, most important undertaken by the V&A, according to the spokeswoman.