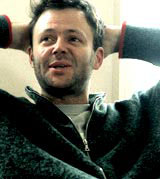 If you could count the British furniture designers who have been most prolific over the past six years on the fingers on one hand, there is a good chance that Michael Young would be one. Born in 1966, this Kingston University-educated designer is best known for his curvaceous, organic shapes and high-tech materials. His photogenic Stick light, produced by Tom Dixon’s Eurolounge company, has become a youth classic, gracing the studios of MTV shows, as well as the pages of most interiors magazines.

In person, Young is an entertaining, lateral thinker who can exude an elusive charm. In many ways, his work speaks for itself. From Cappellini to Sawaya & Moroni, Young has collected commissions from a dream-team of furniture manufacturers, expanding into product design with a homeware range for Rosenthal, carpets for Christopher Farr and his very own line of jewellery, Smak Iceland.

“Young is in many ways a mini-brand, a bit like his contemporary Michael Sodeau, with whom he used to share a studio,” says David Redhead, journalist and curator of the recent Crafts Council’s Industry Of One exhibition. Redhead has in the past called his work “Captain Kirk” furniture, and although his sci-fi trademark is never far away, recent work has developed in versatile directions.

Young himself knows that he is remembered for the curvy-cornered, oblong shape of the Magazine Sofa, a classic of the mid-1990s. “Although it’s a type of shape I use a lot, it’s an old thing. My new things are much more complex,” he says.

Over the past three years, Young has lived in Iceland, preferring “the silence and calm” of this northern outpost to the relentless London life. Although he travels constantly, visiting clients and fairs, it is in Reykjavik that he finds the concentration to design. “I feel like I’m always on the fast-racing track,” says Young. Iceland was for him an opportunity to slow down a bit, and focus on the extraordinary work opportunities that he was being offered.

Unlike other contemporaries, Young does not employ designers, but runs MY Studio with his Icelandic wife, KatrÃ­n PÃ©tursdÃ³ttir, an industrial designer who previously worked for Ross Lovegrove. When they married, they were so disappointed by the lack of interesting wedding rings on the market, that they decided to team up with Snorri Sigurdsson, an Icelandic craftsman and the director of Jens, Iceland’s largest jewellery company. The three created a contemporary, international division, Smak Iceland, which has now expanded into five collections, with designs by the likes of Michael Marriott, the Bouroullec brothers and Ineke Hans.

The couple also recently curated and designed an exhibition for Iceland’s 100 Years of Design. “It was really a service I did for the country,” explains Young. The exhibition, part of the European Union Cultural Capital initiatives, was funded by Reykjavik 2000 and covered the best of graphics, fashion, furniture, ceramics and animation – a wide range of work for what is a relatively young country. “The purpose was to create a reaction from younger people here, so they can see that something like this exists,” he says. “It’s for Icelanders to understand they exist as an entity.”

Yet Young is wary of becoming a spokesman for Iceland. In the media frenzy that has surrounded the island over the past years, his name has often been mentioned in the press in the same breath as Damon Albarn of the band Blur – who co-owns the Barlin cafÃ© in Reykjavik – and Icelandic singer BjÃ¶rk, as representatives of a presumed funky Icelandic scene.

The opening last year of the Astro Bar, a DJ club and bar in Reykjavik, made Young even more popular. The futuristic interiors became a must-see destination among the “design pack”. In September last year, the Astro Bar was pulled down and demolished by the new owners who, in a bid to gain such a prized city location, overlooked its design merit.

“I can’t get depressed about it. I have to laugh,” says Young. “Iceland has no room for expansion – a lot of companies and few opportunities.” The uproar was immediate, and Young hopes someday to resurrect the concept.

Young still has many surprises up his sleeve. This year he plans to open a new studio in East London, while keeping the Reykjavik base. At this week’s

Young actually started his ascent to fame in Japan, where he went in 1995 to develop a collection for E&Y in Tokyo, after a period in London working for Dixon’s Space studio. He is now hoping to resume his Japanese contacts and is keen to do more work there.

For Rosenthal, he has designed a glassware range, presented last August in Frankfurt, and has just completed a champagne bucket.

Young alternates between furniture and industrial design, and relationships with British and international manufacturers. At the last 100% Design show he launched the MY-051 table for furniture manufacturer SCP, and he is currently in talks with Twentytwentyone to re-issue his Magazine range. “We have always admired Young and have sold a lot of his work,” says Twentytwentyone co-owner Tony Cunningham. “He is one of Britain’s leading designers with a strong international reputation and following. A lot of eyes are switched on to him.”

The London-based manufacturer plans to launch the tweaked Magazine range, with additional tables and stools, at the next 100% Design show, a move that would liberate Young from the hustle of producing his own furniture line.

Young’s method of working is immediate. “I will often design something in the 24 hours just after a meeting. In that way you can still feel the energy of the project,” he says. His remote working arrangement allows him to e-mail the sketches from whichever part of the world he is staying. “He’s been a pleasure to work with, he’s inventive and considered. We have never actually had a meeting in London, all the work has been via e-mail to and from Iceland with random meetings at trade fairs in Germany and Italy,” says SCP owner Sheridan Coakley.

Asked if there is anyone he would still like to work for, Young admits he has been extremely blessed. “I try to keep doing work in different countries, so as to keep myself global. It’s not that I want to conquer the world, I just need to make a living,” he concludes.

The book We Like This by Michael Young and Alexander Payne is designed by Maria Beddos and Paul Khera. Published by Black Dog Publishing and priced £9.99