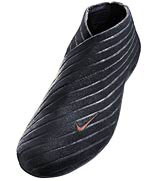 Beauty and athleticism are inextricably linked. Not just aesthetically. Apparently there is a direct correlation between good looks and athletic ability. It all revolves around symmetry. According to Nike, the best athletes in the world have the most symmetrical bodies. It helps them do what they do faster and better, which makes sense in a Darwinian kind of way.

Nike, now aged 30, employs roughly 350 designers around the world; the majority based in its headquarters in Beaverton, Oregon. They recently regrouped into a single building in a bid to share creative ideas, having previously sat inside the numerous product category teams around the campus.

With design so central to so many functions at Nike, the creative directors have been taking time to give it a unified shape and coherence that could easily be overlooked. The Design Ethos, as it is titled, attempts to set out the overall parameters for Nike’s approach to design across all its disciplines.

Motion dynamic: address the needs of the body in motion

Refinement: look for opportunities to edit, evolve and subtract

Abstracted tradition: think of it in the future tense; rethink as well as revisit

There are four principal design functions at Nike: footwear, equipment, apparel and identity. A global creative director heads each up. Inside each group are individual categories such as men’s basketball (within footwear), or women’s apparel (inside the apparel group). Each of these categories has its own design team and design director.

Among the designers, a lucky few work on new products for Nike-sponsored athletes. Sports pros like Tiger Woods the golfer, Lance Armstrong the cyclist, Paula Radcliffe the distance runner and Marion Jones the sprinter have their own people at Nike dedicated to improving their personal equipment. Some of these innovations are often ripe for the consumer market, which is where the majority of Nike’s designers are working. Some aren’t.

Over the years Nike has learned from hard experience that what the athlete likes and what the consumer likes are often not the same thing. Many designs are created solely for the non-professional athlete, as Nike likes to think of them – or put more simply, for the consumer. Even so, consumer products are always created with the objective of being ‘performance’ sportswear. Never fashion. Nike had its fingers burnt in the 1980s when it attempted to move into casual shoes and it is not likely to repeat the mistake again.

‘At Nike, innovation is not simply for Marion Jones at the track at the Olympics. It’s also for people like you or me working out at the gym. So we need to be democratic about our ideas of innovation,’ says Jordan Wand, Nike global director of the Advanced Innovation Team. ‘Our designs are required to perform for elite athletes as well as for everyday e f athletes. Performance for us as a design team though is not only about product, but also about processes with which we approach design,’ he says.

Nike has a considerable research and development resource at the disposal of its designers. Its numerous R&D groups, which range from the technology-focused to the more style-focused, have names like The Kitchen, Nike Sports Research Lab and Advanced R&D.

In the world of sporting product, there can be a tendency for sports companies to tweak and restyle their products without fundamentally changing them. Nike seems to have realised that total and continual innovation is necessary if the company is to retain its position as the top-selling sports and fitness brand in the world. With this in mind it set up one particular research group – the Advanced Innovation Team – inside the apparel group, to enforce the idea that design is not just about simple evolution. The focus for AIT was real innovation – solving a problem in a brand new way.

‘The AIT has been set up as Nike apparel’s think-tank for innovation. Team members should be thinking about innovation and revolution “24-seven-three-sixty-five”,’ says Wand.

The remit of the designers at AIT is to get the groundwork done before the physical designing and innovating can start. So for them design is about going into the wind tunnel and doing air analysis, learning about how textiles perform, and working closely with physiologists, coaches and athletes. The sketching and shaping come later.

For sports such as speed skating, cycling and swimming, the aerodynamic advantages of apparel created by the AIT seem to have already enhanced professional performances at competition level. However, the team is thinking bigger.

‘Imagine’, says Wand, ‘if your clothing could prevent you from being injured in a sport, because it could detect an excess of force or torsion, or detect a biomechanical or physiological weakness.’ This is the kind of challenge Nike clothing designers are trying to face. ‘Form always follows function,’ Wand says. The message is that this design is not about fashion.

John Hoke, Nike global creative director for footwear attaches the same importance to innovation further up the line. His designers take the research group findings and using their insights can then begin to fashion their end products for prototyping and eventually for manufacture. The same principle is applied across apparel and equipment.

‘From my perspective the true beating heart of Nike is innovation, therefore insight is the fuel for our imagination and creativity. It is the genesis point of all our ideas at Nike. Where do we get these insights? It’s quite simple. We find them anywhere on the planet. We don’t discriminate. We look at everything we possibly can to become inspired. We look at global cultures, the world of sports, our key athletes, artists, musicians, poets, sculptors, it doesn’t matter. We uncover any rock to find a way to become inspired,’ says Hoke.

In addition to its own design facilities, Nike also has a raft of consultancy and ad agency relationships to help steer its communications, retail and new product development work. In the US, product design group Ideo has a good relationship with Nike that has seen it work on product innovation with the sports group.

Priestman Goode has also worked with Nike in recent years, though more with the brand rather than on the product design.

‘We were brought in by John Hoke for the opening of Nike Town London,’ explains Priestman Goode founder Paul Priestman. ‘I put on a seminar for The Royal College of Art and Central St Martin’s College, so that the students could interact with Nike and see what it was doing with the brand.’

‘It is interesting that Nike is thinking very big now about the brand and is very aware of public perception and the value of taking a long-term approach to what it is doing,’ says Priestman. ‘The thinking behind my involvement was to help create some contact between Nike and the designers and thinkers of the future.’

Design for women has emerged as a strong component of Nike’s business too, though so far its Nike Goddess retail chain that sells sports gear exclusively for women has only been launched inside the US.

‘A few years ago we reorganised into gender specific businesses – women’s and men’s – and that helped us to better focus on our performance solutions for women,’ explains Barbara Sumner, creative director for women’s apparel.

‘We now have dedicated design and development teams in all of our areas: footwear design, brand design, equipment design and apparel design,’ she says.

Martin Lotti, Nike design director for women’s footwear is one of the driving forces behind the recent push into the female market. ‘What I try to do is create a merger between performance and aesthetics,’ says Lotti, something he did for the yoga-inspired Kyoto women’s shoe he has just completed and that comes out next year.

‘I went on an inspiration trip to Japan, specifically Kyoto, where I saw the Zen Gardens. I was amazed by their beauty and simplicity,’ comments Lotti.

Inside the gardens are a series of large textured line patterns made in the sand on the ground. These became the influence for the lines he would adopt for the final design of the shoe. ‘The second piece of inspiration for the Kyoto shoe was the kimono.

‘Just the simple nature of having one layer overlap the other was the inspiration for the closure system of this shoe.’

The impressive result is a beautiful piece of design that looks extraordinary on and off the foot and still fulfils the brand’s remit of functionality. Lotti’s Kyoto is just one tiny example of the multitude of design projects which are taking place every day inside Nike HQ. Oh, and it is not symmetrical.