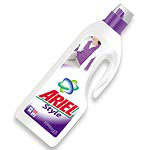 Dew Gibbons and Brusselsbased group Design Board have collaborated to create packaging for Ariel Style, the detergent brand’s latest variant, which is launched in France later this month by Proctor & Gamble.

The product is based around the active ingredient Fibreflex, developed and patented by P&G. This ensures washed garments retain their original shape, the company claims, and Dew Gibbons has created the branding device that presents the feature on pack.

Dew Gibbons began work on the project in March. A consultancy spokeswoman says the group deliberately avoided the ‘cliched photographic styles’ of the category.

Dew Gibbons joint managing and creative director Steve Gibbons, who led the project adds, ‘The direction of the photography had to work toward a more ambiguous image of a person, as research confirmed consumers were influenced by the type of person selected for packaging shots.’

France will be a ‘test market’ for Ariel Style, which was named and positioned with the aim of rolling it out to other markets. P&G design manager Dominique Geeraert says no ‘concrete decision’ has been taken on the other countries in which Ariel Style may be launched and she could give no timescale for assessing its performance in France.