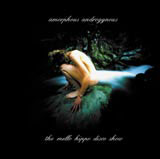 Pinhole photography provides the creative impetus for the sleeve design of The Mello Hippo Disco Show, the latest mini-album from electronica duo Future Sound of London in their Amorphous Androgynous guise. The image, taken by Los Angeles-based photographer Jim Cherry, is representative of the more organic sound of the music compared to the band’s previous releases, says Future Sound of London’s Garry Cobain, who is also responsible for the design work. ‘The pinhole style was a clever solution [because] the music’s very much about going back to ancient wisdom and those things trodden over by the eternal quest for new technological feats’, he adds. The eight-track album will be released in January 2003 through Artful Records.