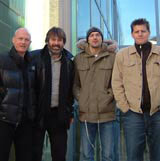 The move follows the departure of Bamber and Forsyth from the Fitch stable at the end of May 2003, following a legal dispute, which has just been settled privately. A legal hearing had been scheduled for 23 February.

‘We have come to a totally amicable agreement with the powers that be. All action has been stopped on both sides,’ says Bamber.

Design fortunes to return to our screens in the autumn?