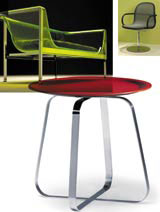 Design duo Era made its Cologne debut with three pieces for Driade – the Tipto armchair, Phantom divan in translucent plastic and interlocking wood Level table. Founder Peter Emrys-Roberts says if any trend could be spotted it was ‘randomness’. ‘The mood was positive but there was little to make you stop and stare,’ he says, but he did single out chairs by Irvine and Plank, plus Konstantin Grcic’s Magis chair.

However, translucent, Perspex furniture such as Era’s sofa was everywhere, and Peter Draenert’s Nurglas slotting stool won the Classic Innovation award. The trend-spotting lounge even predicted a ‘tendency toward the artificial’. ‘Plastics are given a soft, waxy look, resins show glass and tile inlays,’ it says.

The most striking trend was the mixing of traditional materials with cutting-edge techniques, personified by Irvine’s chair. A European Design Centre spokesman observed a move toward retro and away from the hard-edged minimalism of recent years. Casamilano’s Visconti sofa, he says, evoked 1950s glamour and epitomised the show’s look this year.

As always, big launches are kept for Milan, and Cologne inevitably reflects a local bias and Germans’ contemporary taste. But Cologne must be congratulated for a greater focus than ever on looking to the future and encouraging young design talent.

The show has a broader focus than Cologne, spanning tableware and interior accessories as well as furniture. Here’s Design Week’s pick of the bunch:

â€¢ Designer Alfredo HÃ¤berli, named as inaugural Now! Designer of the Year 2004, who showed off his back catalogue of products for manufacturers such as Cappellini, Danese and Driade.

â€¢ Appel d’Air – an air-themed stand with objects ranging from inflatable furniture to blister packaging. Highlights included Moooi’s large ball-of-thread lamp shades and Grcic’s Osorom for Moroso, plus a skeletal version of Jean-Marie Massaud’s Outline sofa. To fit the theme, all products were perforated in some way.