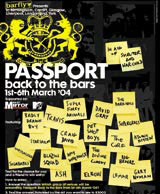 Graphic design consultancy Form has created an identity and promotional materials for Passport: Back to the Bars, six nights of gigs to be held in March in aid of charitable organisations Shelter and War Child.

UK acts such as David Gray, The Darkness, Badly Drawn Boy and Super Furry Animals have been confirmed to perform at the event, which is organised by Channelfly and will be held in its Barfly clubs across the UK.

‘It’s been a fundraising activity from the start,’ says Channelfly event co-ordinator Mark Meharry. ‘Top acts are now doing stadium-style performances. This is about bringing them back to their roots, to more intimate venues, and benefiting Shelter and War Child.’

The background of all materials is made up of artists’ images, which are distressed to look screen printed.

Entry to Passport, which runs from 1 to 6 March, is gained by texting the answer to a question posted on www.musicpassport. org. Proceeds will be split between Shelter and War Child.