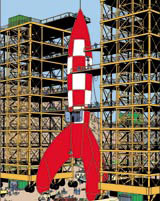 HergÃ©’s now familiar style, the ‘clear line’ as he called it, coupled with humorous observation, inspired narrative and faultless draughtsmanship, dates from this period.

In 1946 the newly-created Tintin magazine became the launch pad for each new adventure. The quality of the paper and colour, plus bigger pictures, made a welcome change from the inferior newsprint of Le Soir, where Tintin had previously appeared as a daily strip.

The magazine enabled HergÃ© to develop stories more organically and create sequels where he felt they were warranted. In the case of Land of Black Gold (1948) he returned to a story that he’d abandoned eight years earlier, after Germany invaded Belgium and Le Petit VingtiÃ¨me had to close down. The intervening years had seen the introduction of Captain Haddock, Professor Calculus and Marlinspike Hall, among others, so HergÃ© set about integrating new elements into the old story.

On the final page of the story, Haddock is prevented from explaining the circumstances of his mysterious arrival, only managing to say that it was ‘very simple and very complicated’.

If one book had to be singled out as HergÃ©’s masterwork it would have to be The Calculus Affair (1954), written at the height of the Cold War, in which Soviet bloc agents try to kidnap the professor in order to steal his plans for a secret weapon that will make them masters of the universe. It showed HergÃ©’s ability to harness his intelligent grasp of world affairs in service of his art. The weapon of mass destruction Calculus is believed to harbour is described as being ‘capable of making H-bombs and ballistic missiles as obsolete as pikes and muskets’.

At the time of HergÃ©’s death in 1983, Tintin’s 24th adventure was nearly completed in rough draft – three pages drawn in pencil, 42 sheets in sketch form – but with no satisfactory conclusion.

His widow Fanny Remi eventually decided to allow this work-in-progress to be published, one half containing the drawings as HergÃ© had left them, the other a transcript of the dialogue presented in the form of a play. Undoubtedly unsatisfying for the average Tintin fan, it is nevertheless fascinating for anyone involved in graphics to see how the master mapped out and structured his stories.

‘The goal is to tell a story in the clearest way, whether it is moving, sad or funny,’ HergÃ© said. ‘Above all, it must have structure.’