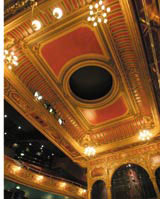 There’s a slew of celebrities and luvvies mingling by the bar, toasting each other with shots of vodka. Confetti is drifting gently downwards from the dress circle, settling on the red velvet seats. It’s opening night in theatreland, the first performance at the new look Hackney Empire following its six-year, £17m restoration by Tim Ronalds Architects.

Originally created by legendary theatre architect Frank Matcham in 1901, the theatre has had a chequered past. The Grade II-listed building had a vibrant early history, hosting the likes of Charlie Chaplin and W C Fields before becoming a TV studio in 1956, when Cliff Richard graced its stage. In 1963 it became a Mecca bingo hall, only turning back to its theatrical roots in 1986. A fundraising appeal began in earnest in 1998 and in 2001 it closed for a complete renovation.

The architect’s brief was focused on improving facilities – which I’m here to test – while preserving Matcham’s original Rococo style features. A new orchestra pit, backstage block and improved access are in place. An educational space, corporate hospitality suite and bar will be complete in spring 2004, when the eye-catching, Springpoint-designed exterior identity will also be applied.

Walking inside on a frosty night, the space envelopes you with its warm reds, rich golds and ornate plasterwork. Imagine a deep red carpet, topped with velvet seats and crowned with a sparkling dome.

Liberal use of greens, pinks and blues as accents to the red and gold add a distinctly festive air. The boxes, with their ornate plasterwork and occasional cheeky cherub, complete the look.

A party atmosphere pervades. This isn’t the Royal Opera House, there’s a definite sense that you’re in a people’s theatre. There’s a feeling of bawdiness just hidden – disguised or grown gracious with old age perhaps.

Surprisingly, given its height and 1300 capacity, the space feels intimate, almost compact. The bar opens on to a landing, with plenty of room to mingle before you take your seat. A series of booth-like tables, in line with the stage, give the impression you could watch the entire show from the bar. Actually, that’s not a bad idea.

Matcham’s credentials are in evidence – acoustics and sight lines throughout the space are excellent. But the new seats aren’t quite so effective. Miserly legroom means my knees consistently bump the back of the person in front and I can’t get comfortable on the cushion.

The toilets – deep plum browns and bright pinks, with grey tiles in the women’s – are reassuringly modern. In the men’s, illustrator Ralph Steadman, rather than sponsor a seat, has chosen to sponsor a urinal and dedicate it to artist Marcel Duchamp.

Hackney Empire’s artistic director Roland Muldoon hopes the theatre ‘challenges convention’ and plays host to a mix of everything from ‘grand opera and world drama to Jamaican farce and stand-up comedy’.

More often than not I would scoff at such liberal-luvvieness. But with its festive atmosphere, glitzy interiors, streetwise location and varied history, it seems an achievable dream for the Hackney Empire.