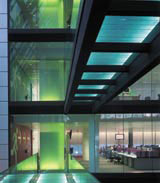 Design-led public sector and charity winners include Thomas Heatherwick Studio for its work with Newcastle City Council; Casson Mann, UNA London Designers and DHA Design Services, winning in the exhibition design and applied graphic design categories for their work on the National Museum of Science and Industry; and Cartlidge Levene, which picked up the complete book prize for its work for the Office of the Deputy Prime Minister.

No Gold award was issued this year, despite a record-breaking haul of 53 Silvers. It is the first time in eight years that a Gold award has not been made.

Among the other winners were Wally Olins and Michael Wolff, who were presented with the D&AD President’s Award, and Nexus Productions, which won the inaugural D&AD People’s Pencil for the Catch Me If You Can title sequence.

Other TV and cinema graphics winners include Lambie Nairn for its Sci-Fi channel brand identity and BBC Broadcast for its BBC4 TV campaign. The interactive and digital media category experienced a resurgence, with awards for De-construct, Unit9 and Ross Cooper. Cooper also won the design for leisure category.

Design Week Award-winners Powell-Tuck Associates (for Bloomberg LP offices) and Frost Design (for the D&AD Review and Accounts) were also honoured in design for the workplace and annual reports categories respectively. Jannuzzi Smith, shortlisted in the DW Awards, was awarded a Yellow Pencil for its typography work on Cecil Balmond’s book Informal.