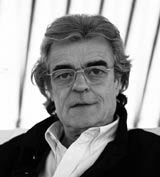 Sometimes a relationship between a manufacturer and a designer blossoms into a partnership that produces a constantly good output of work. This is the case between Michel Roset of Ligne Roset and designer Pascal Mourgue, a ‘friendship’ started over 25 years ago and still full of humour, creativity and respect. I meet the two at the opening of the new Ligne Roset Store in London – also designed by Mourgue – as they engage in good-natured banter, talking over each other and replying to each other’s questions.

Yet this is not always the case in the furniture business. Mourgue, a French designer whose work has spanned over four decades, mentions less fortunate arrangements with other companies by which he didn’t feel challenged or listened to. Undaunted by naming culprits, he quotes Cassina, for whom he has worked extensively, and where, he says, ‘I was not involved in the brand and felt it wasn’t going anywhere.’ Mourgue also worked for Knoll in the past, ‘when it was at the foreground’, and represented an interesting challenge for a young designer – these days he’s not too sure that still holds true.

Furniture isn’t Mourgue’s only interest. He creates sailing boat projects for Cartier, crystal objects for Baccarat, product designs for Tefal and perfume packaging for Escada and Lanvin. He is also an artist, and has exhibited his glass and ceramic sculptures in galleries worldwide.

‘There are connections about the two ways of thinking,’ he says. For example, for Cinna, Ligne Roset’s other marque, he sculpted some pouffes in sand before taking them into production. ‘Drawing is a two-dimensional exercise,’ says Mourgue. He believes that to be able to sculpt and create ‘the same shape in different forms and materials’ can only be an advantage.

Asked how the two inform each other, Roset buts in and says, ‘The artist does a psychology of the individual, while a designer does a group psychology.’ Mourgue adds he uses people as a source of inspiration for his design work and says if he had the opportunity to change his job, he wouldn’t mind becoming an anthropologist.

Meanwhile, he keeps designing for Ligne Roset, the Lover being the latest product to be launched. Seen at the Paris Fair last January, Lover is a clever, comfortable sofa whose stylish lines belie a complicated mechanism that took over a year to develop. The articulated metal frame twists and bends like a human spine, allowing multiple configurations and comfortable positions. The long-life smart memory foam and metal frame have been conceived to last a lifetime, thus ensuring that they can become a ‘a classic’.

Classics and iconic pieces are something both men are passionate about. While Roset quotes Togo, Ligne Roset’s best-selling range designed by Michel Ducaroy, Mourgue mentions the 1965 Djinn collection by his brother Olivier Mourgue, and immortalised in Stanley Kubrick’s film 2001: A Space Odyssey. The two also agree on certain names such as Jasper Morrison, Ingo Maurer and Ron Arad, where either the personality and ‘humanity’ of the designer, or the push toward new technology, manages to inject that certain ‘je ne sais quoi’ that turns an object into an icon. They obviously both hope that the Lover has what it takes to stand the test of time.