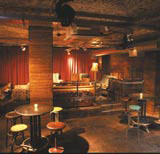 It opens this week underneath Zigfrid bar in Hoxton Square, which was also designed by Daly’s studio.

Daly says the club has a ‘luscious, deep feel’ and the theme for the furniture was inspired by an old people’s home in Dublin.

The ceiling has been hand- painted with repeated jungle patterns in a style reminiscent of artist MC Escher’s enigmatic work and images are intended to evoke ‘childhood memories of pet dogs, guns and innocent 1970s pornography’, According to Daly. The concrete walls have been treated for soundproofing and clad with chestnut.

‘It’s kind of mad really, but it all seems to blend together,’ adds Daly.

Daly has also created the identity for Underbelly, which is a heart with a dagger piercing through the middle.

The venue is designed to recreate the feel of an exclusive afterparty and it will feature live acts, performance artists and DJs.

Daly recently designed the interiors for Harlem, a ‘soul food’ venue that opened in London’s Brixton this spring. The venture was a collaboration between Daly, record producer Arthur Baker and restaurateur Stuart Hopson Jones (DW 31 March).