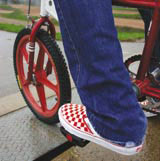 Puma’s latest offering pushes the envelope a long way further, though some might say to the edge of wearability. The Beisser (‘bite’ in German), developed ‘In Collaboration With Ourselves’ by Puma’s design lab in Boston, is one of a series of products ‘committed to the unexpected’. Again inspired by rock climbing, the sole is made up of protruding spikes, emphasising ‘speed, traction, velocity’, teamed with an air mesh upper that is guaranteed to keep you cool. Available in all-black and all-white versions, the Beisser is unbearably out-there, but isn’t that what we thought of Nike’s Shox technology (released in 2000) and even the side-laced Air Footscape (1995). Today, however, they’re street, terrace and dance floor staples.

Careful not to put all its trends in one basket, Puma also panders to the current fashion for all-white trainers (very pub-chic) by offering ‘old skool’ fans a couple of re-released classics, the Match and the Boston (both 1970s tennis shoes), alongside another reissue, The Original tracksuit, a stunner with a 7cm-wide stripe down each arm and leg.

The last word in this season’s sneaker madness must go to Adidas though, for its special edition Superstar range, available in such limited numbers that the company ran a Web-based competition so that a handful of mere mortals may possibly win a pair. The Superstar (aka ‘shelltoe’, immortalised in RunDMC’s tune ‘My Adidas’) has clocked up 35 years of wear. To celebrate Adidas has commissioned five series of seven designs, representing artists, musicians and cities, launched amid much fanfare. By far the most desirable pair are designed by Jason Kedgley in collaboration with Karl Hyde and Rick Smith from Underworld. Kedgley pushed Adidas’s design department to experiment with print technology, by over-printing typographically treated lyrics in varnish on to Scotchlite 3M reflective ink. Kedgley also plays with audience expectations of such a special shoe, by seemingly crossing genres. ‘The shoe has two lives; by day the ink looks beige, low-key, like a skate shoe’, he explains, ‘but at night the lettering glows, it’s very bling!’

Back in Carnaby Street, you won’t find a pair of Underworld Superstars at Size? (a specialist sneaker retailer), but you will be faced with every brand and many models, vying for your attention. ‘It’s impossible to keep up; sneaker-heads used to be able to buy everything they liked, but now there’s so much stuff available because the manufacturers have doubled their output,’ explains Law. ‘There’s two consequences of their tactics, one, models become classics quicker because so many people missed them when they were released that you have bid for them on Ebay. Or, you pick them up cheap in the sales… so perhaps the brands have shot themselves in the foot.’

Asked what his favourite shoe is, Law gives a list of five, including models from Adidas, Puma, Vans and Nike, ‘but’, he adds emphatically, ‘nothing after 1995’. l

Sneakers: the complete collectors’ guide by Unorthodox Styles is published by Thames and Hudson, priced £16.95