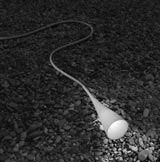 Some other well-known names such as Foscarini (which presented the Big Bang ceiling light, designed by Enrico Franzolini and Vicente Garcia Jimenez) chose to have a more discreet presence, perhaps reflecting the relatively subdued economic environment with which light designers are having to grapple with.

To coincide, four areas in Milan’s Brera district received a lighting makeover courtesy of four Italian design groups (including Piero Castiglioni), working with a Milanese celebrity and a design critic.