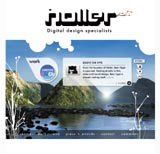 To succeed in the music business you need a certain chutzpah and self confidence; it’s not an industry for the faint-hearted. Holler founders James Kirkham and Will Pyne, who have developed a niche creating interactive campaigns for major labels, bands and artists, have both qualities in spades.

Kirkham and Pyne founded ‘digital strategy experts’ Holler in February 2001 after stints at Zinc and advertising agency Leo Burnett and acknowledge that they were never short on self-belief.

Kirkham left Zinc, 18 months after graduating from university, because ‘they wouldn’t make me a senior designer’. At Leo Burnett the pair weren’t happy with the multiple layers of management who, they thought, were ‘wasting client money, as well as diluting our ideas’.

So, in the midst of the recession, they started their own consultancy, specialising in digital and Web work and encompassing sound design and brand films.

Sony BMG was an early client and the ‘incestuous’ nature of the industry meant other majors were soon knocking at the door. Today, the group counts Universal Music’s Island Records, Polydor and Mercury labels, plus Warner and Virgin among its clients and recent work includes websites, games and campaigns for bands as diverse as Razorlight, Girls Aloud and Jamiroquai.

Its work in the music industry attracted other clients that were keen to tap into youth markets and Samsung Mobile, Morgan Stanley, the Department of Health and Eurostar are also on the consultancy’s client list.

Kirkham says setting up the group in a recession actually gave them an advantage. ‘It levelled the playing field and helped us punch above our weight,’ he explains.

Pyne attributes the group’s success to the founder’s fine art backgrounds, which he believes differentiates them from technically led competitors. Though both graduated from the University of Wolverhampton in 1999 with degrees in graphic design, they both previously studied painting at art college.

‘We combine our talents as artists with the software, and a lot of the work we do comes from the way we used to paint. We start from a fine art component, where others might start from a more technical background,’ says Pyne.

They stumbled on to multimedia design during their degree. ‘We just didn’t understand, we had no idea what was going on,’ says Kirkham. For their end of term project they combined animation and music and surprised themselves by ‘creating some wicked looking stuff’.

Despite the focus on creative backgrounds, there’s also business acumen at work. The group has a good relationship with Landor Associates and has been involved in creating interactive installations and brand films for several of Landor’s larger clients.

Holler also has strategic partnerships with Hoop Associates and ad agency TBWA Upstart, with which it worked on the Eurostar Ski project.

Today there are 12 staff at Holler, including six developers, three designers and two project managers, but there’s no sense of rock ‘n’ roll anarchy in the office – in fact, it’s one of the quietest and most focused you can imagine.

Pyne and Kirkham say they recruit in a slightly unorthodox manner. ‘We’re looking for a broad skill set and employ people who are interesting and rounded,’ explains Kirkham.

One developer plays in a band and has a natural ear for composing music, says Kirkham. He’s helped the group add a sound design element to its skill set.

Another member of staff has a degree in zoology and was junior Wildlife Photographer of the Year for several years running. His visual composition skills were used in shooting a video to promote the Loose Cannons’ latest single Out for the Night, to be released by Gut Records in May.

The video is the first sign of a new direction for the group. Last year Holler won a series of gongs at the Digital Music Awards including best pop website, best on-line game and best urban website. Rather than rest on their laurels, Kirkham and Pyne decided the time was ripe to launch Bear Hype – a Holler spin-off dedicated to creating music videos and brand films.

It was a natural progression, says Kirkham. The first project the duo worked on, as students, combined video and sound in an interactive installation. He feels they’ve come full circle.

‘We get the most fun out of combining moving imagery and sound. And it also makes sense because it makes the most of the good relationships we have within the music industry,’ he says.

Pyne believes it’s a natural direction creatively, too. ‘A lot of our Web and animation work has a filmic, theatrical quality and we felt we had the skills to do this in-house,’ he says.

Winners of RSA Design Directions Awards to be featured on-line