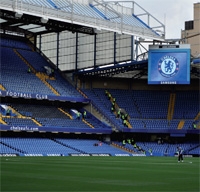 The Chelsea FC Museum is being redesigned by Mather & Co in a building next to the club’s ground, Stamford Bridge, to make it ’highly interactive’.

Mather & Co was brought in two years ago and asked to redesign the museum as it moves from within the Premiership club’s stadium to a new 670m2 space behind the Matthew Harding Stand.

It will now adjoin a new club shop which opened last week designed by Wests, which worked in association with Mather & Co.

According to Mather & Co’s lead designer on the project Gemma Smith, ’The new museum will be highly interactive, showing key objects, memorabilia and trophies.’

A touch-screen, interactive shirt display will be included, ’showing shirts from throughout the ages’, says Smith.

There will also be an Adidas Shooting Gallery designed by Mather & Co and sponsored by Adidas, which Chelsea says ’offers a tutorial on how to perfect goal-scoring techniques’.

New sculptural impressions of the club’s founders have been designed and existing models of the old and new stadiums will be taken from the old museum.

A small audio-visual theatre will be installed in the new museum, which is due to open in the summer, and there are plans for a Pepper’s ghost hologram interactive that will show Chelsea players.

The new museum will be supported by a microsite designed by The Forest which was appointed in April to design an interim site ahead of a full website.

The microsite will provide a player timeline ’including anyone from Chopper Harris to Fernando Torres’, according to The Forest creative director Karl Hudson.