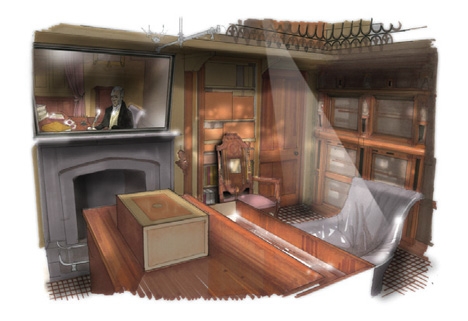 Studio MB has created the new name for the Sir Walter Scott’s Abbotsford Museum in Roxburghshire, Scotland, and is working on exhibition design for Scott’s house, gardens and a new reception building.

The consultancy was appointed to work on the home of the novelist in August 2009 following a national tender and funding was approved in July 2010. It will now finalise designs and work on implementation for a two-stage opening the new visitor reception will be opened in July 2012 and the historic house restored for April 2013.

Having been kept in the Scott family and largely preserved in its original condition, the house was handed over to a trust in 2007 and named Abbotsford the Home of Sir Walter Scott ’which wouldn’t fit on brown [Highways Agency] destination signs’, according to Studio MB director Charlie Barr.

Interpretation, exhibition, signage and graphics throughout the house, gardens, grounds and a new visitor reception building which is being designed by Mark Hopton LDN Architects are now being created by Studio MB.

Barr says being faithful to the preservation of the house is important, so immersive environments will be created using lighting and audio to highlight artefacts, as Scott was ’a great collector’.

Key to the exhibition will be discovering who Scott was ’a great author, but also an impresario and collector. He collected everything from 14th-century armour to a cross that Mary Queen of Scots took to her beheading’ according to Barr.

In the visitor reception display cases will highlight key objects and two bookcases will contain audio-visual presentations one showing actors playing Scott’s contemporaries talking about him and the other modern authors conveying his importance and influence.

There will also be audio narration ’in Border tongue’ to accompany display cases with original copies of texts.