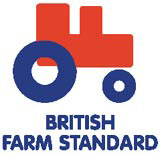 The bold red tractor symbol – which is used on supermarket food packaging to identify it as UK-grown, quality produce – was created by BGA earlier this year.

The ad campaign rolls out in October across national and regional newspapers, consumer magazines and billboards. It will focus on the NFU’s support of the British farming industry to produce food the consumer “can trust”. The logo also verifies standards of food hygiene and animal welfare, and gives consumers environmental peace of mind.

The creation of the original logo followed research which showed that consumers wish to support British produce, but cannot identify it clearly while shopping. Since it was launched in June, the logo has appeared on fresh and frozen vegetables, meat, eggs, salad and fruit.