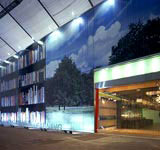 Tim Pyne, founder of events consultancy Work, has hit back after newspaper reports that David James, chief executive of Millennium Dome organiser NMEC is investigating the consultancy’s appointment to design four of the Dome’s 14 zones.

The reports have centred around accusations of cronyism, sparked by an alleged relationship between Pyne and NMEC director Claire Sampson. Work designed more zones than any other group. An NMEC spokesman declines to comment, beyond saying, “Investigation is too strong a word… we are looking at it”.

Pyne says that after completing its first Dome zone, Living Island, within its £5.5m budget and ahead of schedule, the consultancy was asked to contribute to two further zones. “When it was finally concluded that a new design team would have to be put on to Learn and Work [zones], with the exception of Land there wasn’t anyone really in the running apart from Work, and Land was dealing with its third sponsor change at the time,” he says.

He adds that, having started earlier than other design groups, and benefited from time savings linked to the lack of a sponsor for the Living Island zone, Work could take on further projects. “The decision to appoint Work was debated long and hard by the entire Litmus Panel [the Dome’s creative thinktank],” insists Pyne.

Work’s appointment to its fourth zone, Shared Ground, came in August 1999, four months before the Dome was due to open. Pyne says the zone had problems with its storyline, and that several other design groups had contributed to it. “We had a team coming off Living Island next door… we were the only hope of delivering the zone on time, so Jennie Page, Michael Grade and I spent a long evening sitting in it, with a sketch book,” he says.