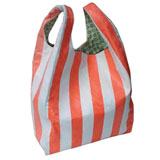 It’s been a hectic year for the Crafts Council, what with the closure of their renowned gallery in London’s Pentonville Road, the departure of a truly innovative director, Louise Taylor, and the current overhauling of its glossy magazine/community newsletter Crafts, under the stewardship of The Guardian’s design maven, Caroline Roux.

If the hype is to be believed, the Crafts Council is on a renewed mission – to drag the crafts, kicking and screaming, into the 21st century. Getting craft objects and makers before a buying public has always been part of its remit, though, and this week sees the launch of a high-profile initiative intended to replace the cosy, but cramped Chelsea Crafts Fair, which celebrated its 25th anniversary in 2004.

Now the craft world’s premier selling event is Origin. Established in partnership with Somerset House, the London venue now under the direction of Gwyn Miles, the two-week, two-part show has been set up in a sleek, airy, purpose-built structure amid the architectural grandeur of the courtyard. Created by Ben Kelly Design (a seasoned exhibition designer, thanks to a run of years sprucing up 100% Design), the pavilion will house not only the selling show – featuring jewellery, textiles, furniture, glass, ceramics and more – but fringe events, including a series of talks and Springboard, a showcase for emerging talent.

Origin: The London Craft Fair runs from 3 to 8 October and from 10 to 15 October at Somerset House, Strand, London WC2.