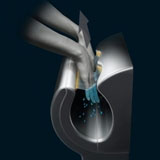 Dyson is unveiling its first non-vacuum cleaner design in six years, with the global launch of an innovative high-speed hand dryer called the Dyson Airblade. Speaking to Design Week about the product, founder James Dyson also revealed his difficulties in securing planning permission for the proposed Dyson School of Design Innovation in Bath (DW 13 July).

With a development budget of £10m, the Airblade uses a 640km/h stream of unheated air to ‘scrape’ water from a user’s hands in a few seconds. Dyson claims that the system is more hygienic and uses around 80 per cent less power than conventional heat dryers.

Designed in the company’s headquarters in Malmesbury, the Airblade will be manufactured in China and distributed globally across the company’s 42 markets. Dyson describes the venture as a ‘new type of business’ for the company.

‘Most dryers are fairly awful – they are ineffective, slow and expensive. They work by evaporation, which is why they take so long, and, if you leave without fully dry hands, the germs multiply at an amazing rate and are deposited elsewhere,’ says Dyson.

The idea for the dryer came from a ‘happy accident’ when a company engineer testing ‘air knives’ for an unlaunched Dyson product discovered that the force of the air could remove the moisture from his hands in seconds.

Trial locations include two Hilton Hotels and the Bristol Royal Hospital for Children. Motorway service station group Moto is to install the dryers following a trial, and Dyson is hoping to secure further contracts from the NHS Trust, hotels and architects.

Separately, however, Dyson is struggling to secure planning permission for his £22m design and engineering state school in Bath, after protests against the necessary demolition of an unused Victorian factory at the site.

Planning applications were submitted on 15 August, but construction work was already scheduled to start in March 2007 for a September 2008 opening.

‘The buildings are not listed, although some people are now looking to have them listed and restored. But it would be inordinately expensive to restore them. We have no back-up location – Bath is devoid of sites,’ adds Dyson.