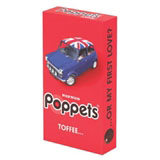 Following the successful relaunch of Paynes Poppets earlier this year, with a retro packaging design by Vibrandt, the packs will also be further refreshed next year with possible alternative seasonal designs, says Mattock. ‘We will continue the retro feel. There is a lot of scope for this design.’

The packs show each Poppets flavour featuring four different front-of-pack designs depicting famous British icons, such as a VW Camper, a conker, a Mini (pictured), a lava lamp and a NatWest Piggy Bank.

The redesigned packs include a portion-control device and are available in toffee, mint, raisin and orange flavours.

Simon Gore, joint managing director at Vibrandt, explains that the design concept is ‘related to nostalgia and is about picking out iconic British images.’

Fox’s Confectionery began as a wholesale grocery and confectionery business, set up by Walter Richard Fox in a Victorian warehouse in Leicester in 1880.