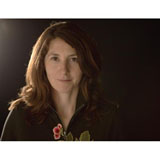 Photography is an approach as much as an art form for Christine Donnier-Valentin. Trish Lorenz gets a snapshot of the French Anglophile’s team ethics, her tranquil aesthetic and her infatuation with abandoned sofas

Photographers spend so much time looking outward at other people and places that putting them in the spotlight can be exigent; Christine Donnier-Valentin is finding this interview a bit challenging. She is welcoming, warm and very easy to like, but her natural openness is being constrained by the situation and there’s diffidence in her answers. You get the distinct impression that she’d rather be focusing the attention on someone else.

Her own approach to putting subjects at ease is all about communication, building trust and looking at them from a different perspective. ‘Taking a picture is like creating a sculpture,’ she says. ‘You see a way of photographing someone that will make them look good, which isn’t the usual way the person would represent themselves. I like taking pictures of people in interesting positions, not the obvious shot.’

Donnier-Valentin has been working for almost 15 years, but only came into the industry because of a chance meeting. She was studying as an architect in her native France when a holiday in London led her to reconsider her career. ‘I’ve always loved photography and always taken pictures, but hadn’t thought of working on a professional level,’ she says. ‘In London I met a photographer who introduced me to a professional studio and I made up my mind to retrain.’ 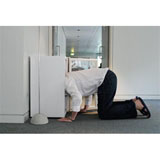 She returned to France, quit her architecture course and spent six months working in a photographic studio in Grenoble before returning to London. Today she’s a confirmed Anglophile. Once in Britain she decided not to return to formal study, ‘Taking pictures and working with photographers was a more useful way of learning the craft,’ she says. She worked as an assistant with photographers across architectural, still life, fashion, portraiture and food subjects ‘to learn as much as possible’. ‘It was a great learning process,’ she says. ‘I learnt about lighting with still life photographers, communication skills through portraiture work and patience in architectural shoots.’

Although she planned to work in fashion, this was the area that disillusioned her most. She’s reticent about her reasons, but there’s a sense that Donnier-Valentin doesn’t enjoy working with egoists. ‘In the commercial projects I really enjoy being on location, sharing ideas and working towards a goal,’ she says. ‘But some people forget that working on a photo shoot means you’re working as part of a team with art directors and clients, and everyone has a part to play – my assistant is as important as anyone else on set. For a photographer, people skills are as important as technical skills.’

Her commercial clients include D&AD, Land Securities, Orange and pet food company Cesar. Much of her commercial work involves images of people, but Donnier-Valentin eschews standard portraiture. For a recent D&AD project, which saw her take pictures of a judging panel in reportage style, she deliberately focused on particular details – a pair of shoes, for example, or stolen moments – someone searches inside a fridge, their face obscured by the door; another person takes a cigarette break, their face hidden by signage.

Alongside her commercial work, Donnier-Valentin has built up a body of personal projects. ‘I’ve always taken other pictures. My personal work is more about details, urban places and landscape. I love taking pictures of water and I like looking at ordinary scenes, situations of despair or extremes and finding an aural calm and serenity in them.’ 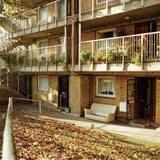 One project, Why Sit Inside When You Can Be Outside, has seen her photograph abandoned sofas. She doesn’t touch or move them; the photographs are true to the way the sofa has been discarded. It says a lot about Donnier-Valentin’s approach that the project has become what she describes as ‘a network thing’. Friends, colleagues and ‘people I barely know’ call her when they see an abandoned sofa and Donnier-Valentin credits each photograph with the time, place and the name of the person who recommended it to her. ‘I like the fact that people think of me when they see a crappy sofa in the street,’ she says.