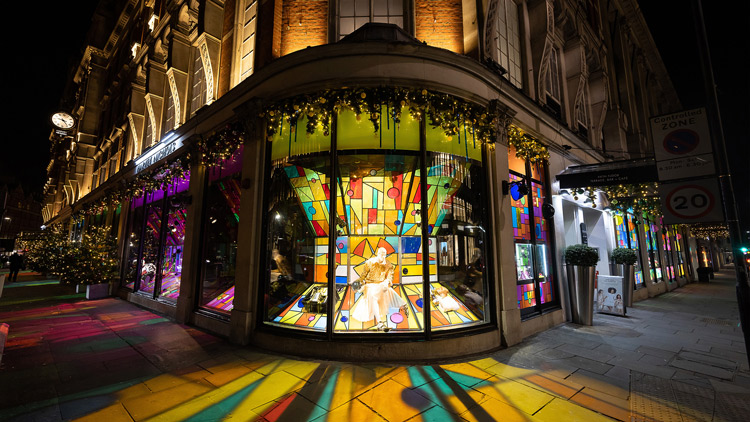 Bright colours are the star of the show this year – a stark contrast to last year’s monochrome affair. Modern stained glass panels form the background of several of the windows. These backlit panels are joined by lots of twinkling fairy lights and hand-painted baubles which wrap around the store.

According to Harvey Nichols, each window has a colour theme which is designed to evoke a different emotion. The yellow window has been developed to “create a sense of energy and excitement”, while orange aims to grab attention with a “happy and uplifting effect” and blue to project a feeling of calm.

Liberty London is taking its theme of “sending joy” very literally this year, with a set of window displays that are “an ode to the Royal Mail of yesteryear”. According to Liberty lead creative Hannah Perse-Cottle, many of the visuals are inspired by old pictures of Royal Mail depots where parcels and letters can be seen stacked in huge piles during the festive period.

The series of scenes tells a story which begins with a “magical” post box that whisks letters into the air. Other scenes are similarly filled with letters and envelopes – some 33,000 custom envelopes have been used throughout, Perse-Cottle says – as well as lots of gifts.

The set itself, which is completely plastic-free, has been handmade in East London by expert carpenters and scenic artists, she says. Each scene is finished in a festive red and cool-toned lilac colour palette, which Perse-Cottle says is “truly Liberty”. 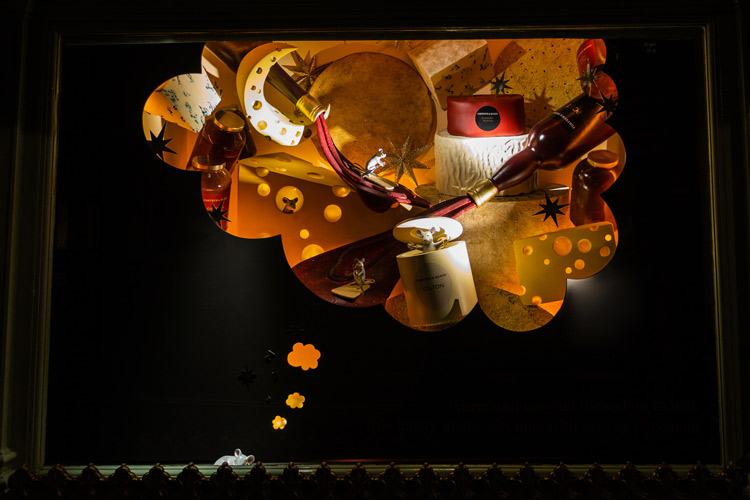 The Piccadilly-based department store has considered itself the “home of Christmas” for the last 314 years, with its front display windows the gateway. This year’s theme for the windows is “animal dreams” and sees the shop front adorned all manner of creatures in festive settings.

Designed in-house, the department store says the offering is full of detailed craftsmanship. Among the festivities are dancing robins, magpies adorning themselves with jewels, skiing hedgehogs and a sailing owl. Food and drink are running themes throughout – the hills the hedgehogs sit atop are actually meringues, while the river on which the owl floats is tea.

Just around the corner on the shop’s Duke Street entrance is another theatrical display, this time comprised of “show-stopping golden wickers” which each showcase the product offerings found in the store’s famous hampers. 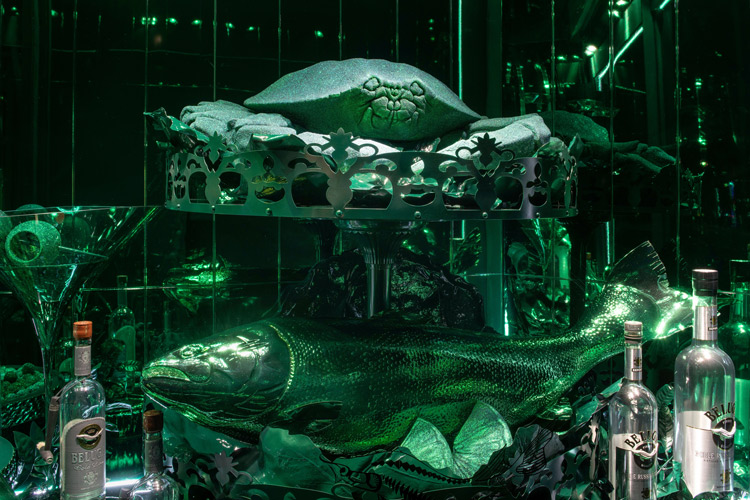 In 2021, Harrods is challenging passers-by to “witness a spectacle” with their window displays centred on a traditional feasting table. Lavish scenes range from an all-green giant crab, to a diamond-encrusted wine bottle and teetering macaron towers.

While the displays are static, each window contains a QR code which when scanned showcases videos where the sets are brought to life. Additionally, four other QR codes can be found across the shop front, and when scanned these allow customers to use festive filters and animations.

Additionally, the store’s Hans Crescent entrance has been adorned with a 15-metre Chanel No.5 bottle installation. It is related to the in-store Finding No.5 treasure hunt. 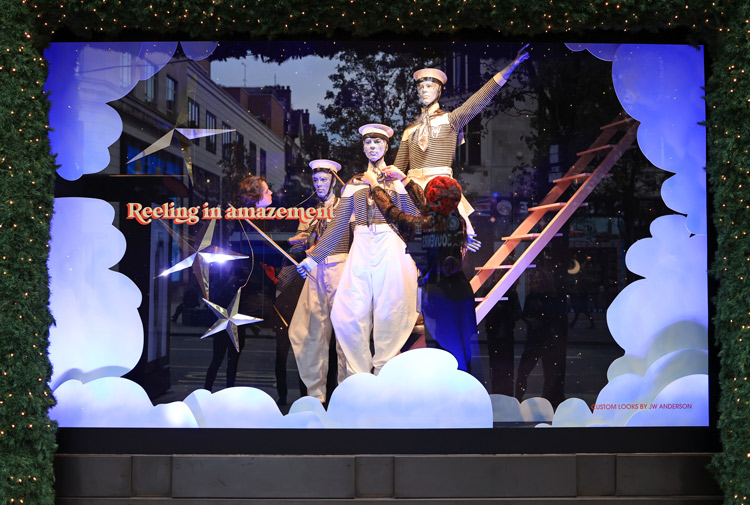 Always among the earliest to begin the festivities, Selfridges started putting up its Christmas decorations in October. In a similar move to Fortnum’s, this year’s window theme for the department store is “Christmas of Dreams”. The store describes the approach as “theatrical, nostalgic and dreamy”.

Underpinning the windows is the visual language from the “golden age of Hollywood”, Selfridges says. Musical references, draped curtains, and scalloped frames are all featured. Some windows also feature moving parts.

The majority of the windows have been designed in-house, but Selfridges has also collaborated with a number of artists and designers across the displays. Several fashion designers have been commissioned to display one-off pieces as part of the sets, while London-based set designer Paulina Piipponen has been give creative control of three whole windows. Her three tableaus combine texture, colours and tactile elements to create “captivating scenes” based on traditional Christmas themes.

What has been your favourite festive window display so far this year? Let us know in the comments below…