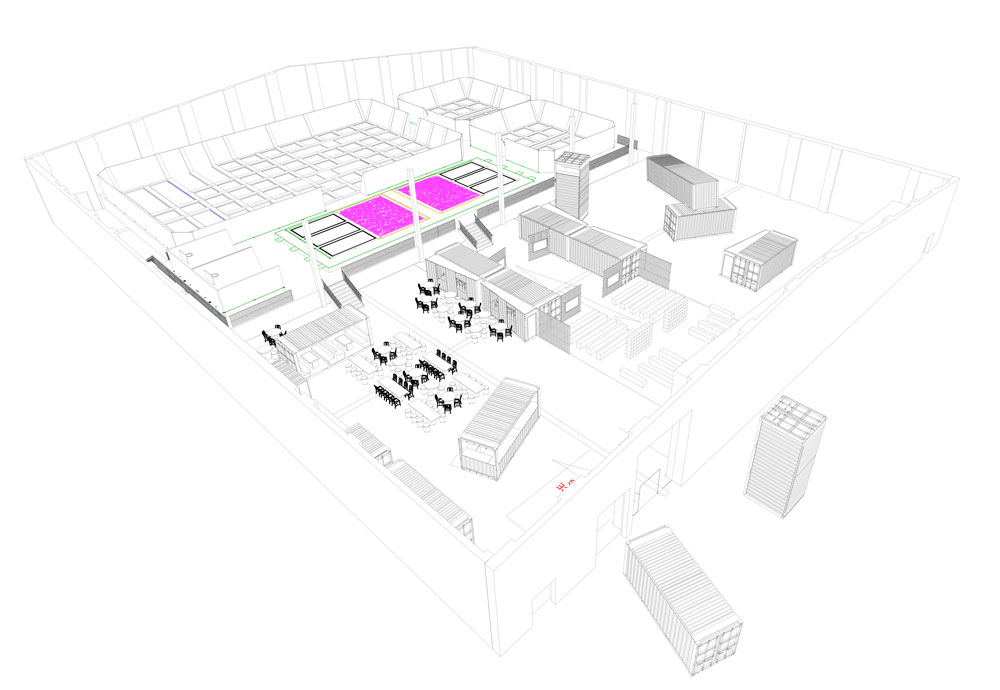 Europe’s largest trampoline park will open this month, and has been designed to appeal to adults as well as children, according to the project’s interior design consultancy Dolman Bowles.

Freedog, based in a former distribution centre in Kembrey Park, Swindon, will encompass a 3,300m2 space, and host more than 100 trampolines.

Aimed at both children and adults

Dolman Bowles has aimed the park at a “main audience” of families with children and teenagers, but says that “20 to 30-year-olds will also enjoy the exhilaration of the park”.

The interior design retains the industrial style of the business park in which it is based, says Phil Dolman, co-founder at Dolman Bowles.

“We wanted to keep the building as raw as possible,” he says. “It’s not been fully-prettied up. This is to maintain the honest, utilitarian feel when you walk into the warehouse, rather than trying to hide that quality.”

Design elements include concrete floors, the retention of original markings from when the building was a distribution centre, “industrial-style” lighting, raw plywood and cardboard tables and chairs, and shipping containers to separate the different “activities” of the space.

Dolman Bowles has implemented a grey, white and black colour scheme for the trampolines and shipping containers, with “splashes” of fuchsia pink scattered throughout.

“A lot of trampoline parks go for multi-coloured interiors,” Dolman says. “There’s something a bit more sophisticated about this palette.”

Additional shipping containers will be added to the space to create a parkour-training space for free runners, an e-gaming zone where visitors can compete in virtual reality battles, a DJ tower and an exterior café.

The e-gaming zone will include equipment such as treadmills, that will enable visitors to “fully, physically immerse themselves in an activity”, says Dolman.

The walls of the building and shipping containers have also been left as “blank canvases”, where illustrators and graffiti artists will be encouraged to hold competitions and showcase their work.

“Such as with the parkour area, this will be in keeping with the space’s branding as an ‘urban activity centre’,” says Dolman. “It gives it a bit more of a grown-up feel, and shows its not just trampolines in a building. Graffiti often gets a bad reputation, and this is giving it a positive spin.”

Change Nation designed branding, while Sibling and Co created the graphics. The name Freedog was chosen to convey a “feeling of freedom and exuberance”, says Dolman.

Freedog trampoline park is set to open in the coming weeks, and visitors will be charged at £10 per booked hour slot. Bookings are available on the Freedog website.