“They’re these tiny little canvases, and when combined they tell a pretty complete history of Britain,” says designer and Mr Creative creative director Martyn Routledge about his new book.

The Beautiful History, written by Routledge and author Elspeth Wills and illustrated by Adam Forster, charts the history of the country by way of its football clubs’ badges. Routledge says there is a wealth of historical knowledge to be found in this way. 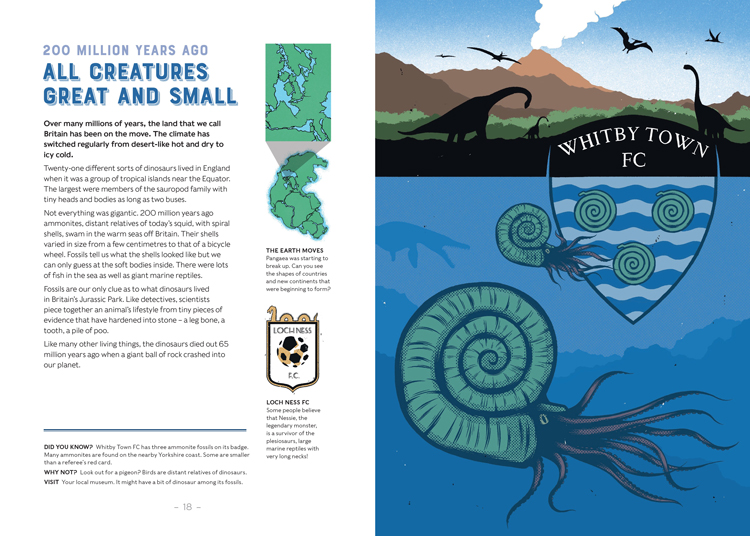 The book is a follow-on piece from Routledge’s 2019 volume The Beautiful Badge. The award-winning book was based on the designer’s university dissertation. It featured his pre-internet first-hand research, which involved getting in touch with every British football club (and fanzine) for information on their badge design.

Routledge says The Beautiful History seeks to revisit the topic in a more ambitious way this time. Each badge included in the book is a plot point in British history – ranging from the pre-historic to the modern day, with stops including, Roman Britain, the Battle of Hastings and the Mayflower setting sail.

As a boy, Routledge recalls being “not particularly academic, but completely football obsessed”. Despite not being a big reader, he would devour football books, and says there are plenty of lessons to be learned from the game. He adds that the book is aimed at kids and adults alike, and features badges “from non-league minnows to Premier League giants”.

The book is split into several distinct eras of British history. And while some badges reference historical events directly related to a football team, many more offer context to the towns and cities they were founded in.

Whitby Town FC’s crest features three ammonite fossils on its badge. These pre-historic shelled creatures are distant relatives of modern-day squids, and their remains are commonly found in Yorkshire, where the club is located. Meanwhile Hartlepool FC’s crest is reference to the first modern humans and the world they lived in some 14,000 years ago. It features a stag drinking, a popular subject for cave painting at the time.

Some badges showcase pieces of history that are more “hidden” than others, Routledge says. Lincoln City FC’s imp crest, for example, is a reference to devilish figure which is hidden inside the city’s cathedral. Its entry into the book gives context to the building, which was constructed in the 13th century and was the world’s tallest building for 300 years. 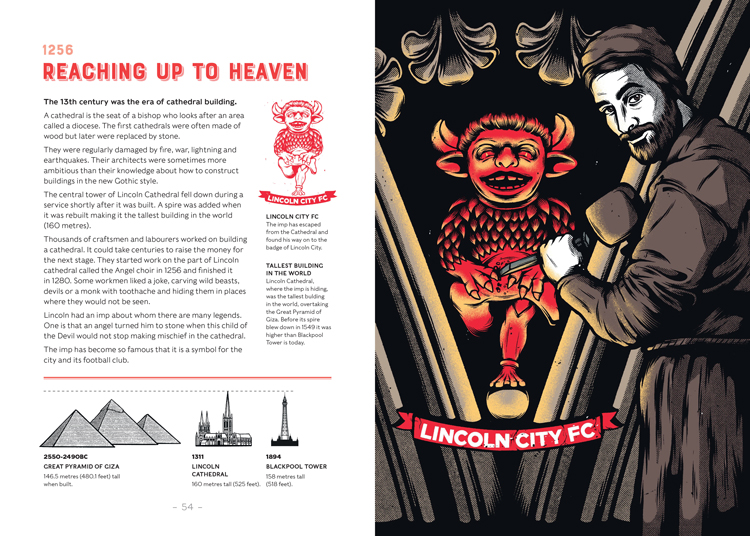 Other football club badges have sadder and even ominous historical references. Chesterfield FC’s badge, for example, features the city’s cathedral’s twisted spire. The spire is the only one of its kind in Britain, and is the result of unexperienced craftsmen working on the structure. Why weren’t there more experienced workers onboard this project in 1349? Many of them were killed by the Black Death plague.

Routledge points out another, more poignant historical marker on Coventry City FC’s badge. Featuring a phoenix, the crest is a reference to World War II and the night the city was practically raised to the ground by a night of German bombing. The phoenix was adopted by the city council and football team shortly after, Routledge explains, as a symbol of the city rising from the ashes.

The design of the book aims to draw readers in with “the familiar” – the football club badges themselves – Routledge says. Each well-known badge is depicted, alongside supplementary information, diagrams and maps to help tell the story.

Spreads also feature illustrations from Forster, which aim to tackle each moment with some character and, where appropriate, light-heartedness.

“Many people, myself included, will have seen these badges countless times but not picked up on some of these really important historical references,” says Routledge. “And that’s part of the drive of the book, they’re things that are familiar, but we’re just trying to get people to re-look at them in a different way.”

The Beautiful History is published by Pitch Publishing, and is available to order now from the Pitch website. More information on the book can be found on the Mr Creative Studio website.