Launched in the 1990s, Turner Classic Movies is a film-oriented television network operated by WarnerMedia. It has a reputation for showing a wide variety of films, and this was the focus of the new brand.

“Classic films don’t just live in the past”

Sibling Rivalry was brought onto the project having worked with Turner Classic Movies CMO Tricia Melton on past projects. The studio says the work was centred around “three fundamental pillars”: relevance, context and curation.

“Classic films don’t just live in the past — they continue to inspire, influence, and reflect so much of our present and future,” says executive creative director Lauren Hartstone. “That’s why we sought to maintain the brand qualities previous fans loved, while also appealing to new and evolving audiences.”

She adds that the project was about maintaining a “delicate balance of classic and modern, traditional and culture-forward”. 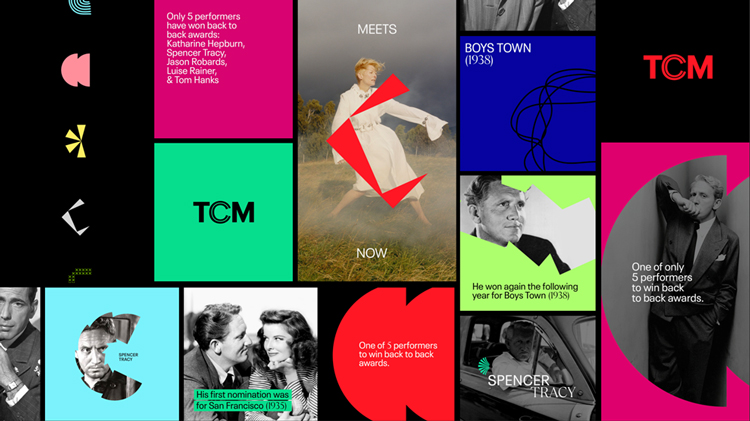 “Where Then Meets Now”

The main driver of the new look is the idea that what one person considers to be a “classic” film is not necessarily the case for another. To show this graphically, the team has developed a “C” icon which is “constantly changing”.

Each “C” icon is paired with its own unique motion behaviour to further stand it out from the rest. These can be shown across the Turner Classic Movies brand, but particularly across social media and television idents.

Additionally, the “C” icons can act as a window for content, most often used to preview the channel’s vast array of films.

The “C” design system is supported by a new tagline and strategy, “Where Then Meets Now”. This is designed to “reframe” the conversation around classic films again and can be used to compare different kinds of movies, as well as support different promotions on the channel.

“A modern take on classic design”

For the colour palette, the team was inspired by the “quintessential colours of Technicolor”, Hartstone says. The use of such a bright and varied palette brings “a new vibrancy and energy to the TCM brand,” she explains.

Both the colour palette and new typography aim to represent a “modern take on classic design”, the studio says. The “C” used in the static TCM logo, for example, is supposed to evoke associations to a traditional film lens or film strip, Hartstone says, while the surrounding letters are “bold, clean and modern”.

The wider updated typographic system juxtaposes Neue Plak, an updated version of the 1928 classic font, with TT Ramillas, a transitional serif font which Hartstone says lends an “edge of modernity” to the identity.

Sibling Rivalry also collaborated with Made Music Studio to create a custom sound for TCM’s sonic identity. The “song” is a mash-up of several genres, including pop and different kinds of strings, which is a nod to Hollywood musicals.

What do you think of the new Turner Classic Movies identity? Let us know in the comments below…

From dinosaurs to the internet: a history of football club crests