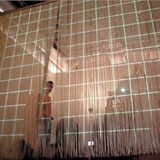 In 2005, I received a commission to do my first interiors job, for Vodafone. The main piece was to be a map showing its global activity. Finally, I was able to bring together several influences into one piece.

First, my father is an optician and my mother is a ceramicist, and their two disciplines have slowly filtered into my sphere of interest. Light, glass and form have begun to excite me more than the horribly constraining, two-dimensional, rectangular world of the screen.

Second, Ron Arad’s reactive curtain (which we at Tomato collaborated on) really exploded with the idea of the screen. It was both penetrable and multi-planed (front and back). Though experientially it was a fantastic piece, it still relied on a translucent medium to carry the projection.

Third, Ingo Maurer’s LED bench, which was exhibited at the Victoria & Albert Museum, demonstrated the magic of wireless light in space – but it’s a shame it was static.

Finally, a piece of work by Andrew Pepper at the Lumia exhibition in Copenhagen in 1999, where he combined simple geometric projections onto a rotating, simple, 3D form, made of several translucent, vertical planes – complexity emergent from the combination of two simple systems.

Note: do not attempt to make a curved, interactive, multi-depth projection surface at home – not because it is dangerous, it’s just bloody difficult and life is too short.

Note two: any similarity to the The Minority Report is purely coincidental.