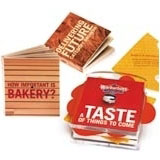 The Brewery has designed a website – www.danielhechter.net – on-line advertising campaign and in-store point-of-sale for fashion brand Daniel Hechter. The work launches this week.

999 Design has created a promotional piece about the ‘future of bakery’ for Warburton’s (pictured left), to be distributed to UK trade buyers. A Taste of Things to Come is presented as a sculptural ‘sandwich’, with two books and various ‘fillings’.

Champagne house Dom Pérignon is to launch a limited edition 1998 vintage, with a bottle and packaging design by Karl Lagerfeld. The design builds on the signature shape of the bottles, which have remained unchanged since the 17th century.

The undergraduate prospectus for the University of Southampton has been redesigned by Aricot Vert and features photography by Zak Waters. 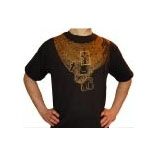 Assemblyroom is designing eOffice Manchester, an office space which it describes as a ‘mini business district under one roof’, set to open in the city’s Piccadilly district in May. Branding and graphics for the space are by Ashleycarter Consultants.

Very has designed a Mr T-shirt (pictured right), a follow on from its Mr T-towel

Ebb & Flow has designed an identity and poster for anti-bullying campaign Bullywatch London. The work launched across the capital last week.