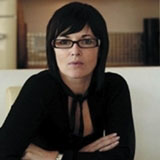 Design consultancy Absolute currently has a virtual monopoly on Cornwall and is designing Jamie Oliver’s new Fifteen restaurant in the region. But it is not resting on its laurels, says Hannah Booth

‘Cornwall is so undesigned,’ sighs Helen Blake, musing on why the county she has lived in for most of her life is so, well, shabby. She brightens: ‘But it only takes one well-designed venue – a bar or a restaurant, for example – to up the ante for everyone else.’

Blake is referring, of course, to the work of Absolute, the consultancy she founded in Truro 15 years ago. Six years ago, she expanded from just graphics into interiors, and has been designing bars and restaurants all over Cornwall. Absolute has, as she puts it, ‘no real competition’. ‘I mean, it won’t last, I’m sure it won’t last,’ she says, a touch unconvincingly. ‘Maybe our reputation scares people off.’

This reputation is about to go national. Absolute is designing the interiors for one of the most talked-about restaurants in Cornwall since Rick Stein took over Padstow – Jamie Oliver’s hugely successful restaurant chain, Fifteen, which opens next month.

‘It’s such a coup for us,’ says Blake. ‘It will give us credibility outside Cornwall and, hopefully, access to blue chip clients and household names.’ She already has a new client in Worthing on the back of her work for Fifteen – and it isn’t even finished yet.

The Fifteen trust (all Fifteen restaurants – London, Amsterdam and soon-to-be Melbourne and Cornwall – are charities) wanted to work with a local group, she explains, and found Absolute through its past interiors work and its membership of the Cornwall Design Forum, which Blake chairs. ‘It didn’t want a global look – rather, individual designers with local knowledge to make their mark on each restaurant.’ These include designer John Warwicker for the Melbourne site.

With only a few stipulations from Oliver – ‘He likes rustic, natural materials, nothing high gloss, and prefers black, grey and pink colourways’ – Absolute has been given carte blanche with Fifteen. The restaurant is situated on Watergate Bay beach, four miles north of Newquay, on the first floor of a long-established beach bar, Extreme Academy.

‘Extreme was one of the first cool beach bars in Cornwall,’ says Blake. ‘It’s such a contrast to the fine dining of Fifteen. It has sand all over the floor and attracts a surfy, chilled out crowd. But that contrast is all part of the charm.’

The restaurant upstairs is being completely remodelled. The team has ripped out the wooden floorboards – they are being sanded, stained dark and replaced – and installed floor-to-ceiling windows that open out onto a decked terrace. One wall is given over to an open wine store, 4m high. And 78 drop lights, by Danish company Next, ‘shaped like droplets of water’, will be suspended from the original wooden roof struts. ‘Oliver wanted chandeliers, like Fifteen London,’ says Blake, ‘but that would have been too weird in a beach hut – too shabby-chic, too contrived.’ 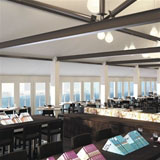 The dining chairs are the mis-angled, Shaker-style AVL chair by Moooi, designed by Joep van Lieshout in 1999, on which Blake will place black leather cushions with pink stitching, ‘to make them more comfortable’. And the table tops will be 14mm-thick, white Corian. ‘Fifteen is about fine dining, so we wanted elegance, but Oliver doesn’t do linen and tablecloths,’ she says. ‘So the Corian is designed to represent a white, starched tablecloth.’ A portion of the floor will become a private dining area, seating 12, complete with a black Corian oval table and pink carpet, and will be separated from the main dining area when in use by an old garage door, ‘which we’ll batter up a bit’. Very Oliver.

‘The whole concept behind Fifteen Cornwall (pictured left) is about exploiting the contrast between fine dining and a beach hut,’ Blake says. ‘Our team is well-placed to understand that – we’re a mix of local people and designers who’ve moved down from London.’ Blake is a local and worked in London for three months at the start of her career, before returning to Cornwall. ‘My college friends were laughing at me, telling me I was mad. But I bought my first house ten years ago and they’re not laughing now. Now all I get is, “Oh, you’re so lucky”. It is hard to start a business in Cornwall. It’s not like working in a self-contained city like London or Bristol – everything is spread out between towns. But we won’t have a monopoly forever,’ she explains.

The competition should take note: with Absolute’s reputation set to spread beyond the county borders, there may be openings for interior designers. As Blake says, Cornwall needs it.

The Workroom design for Reckitt Benckiser