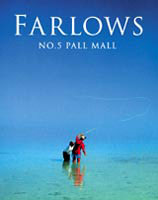 JHP is creating interiors and a merchandising strategy for a new flagship London store for country clothing and accessories brand Farlows. The store opens in May.

The consultancy will start on the implementation of design concepts after Christmas. It will command a six-figure fee for the work, which includes the redesign of the brand identity and mail-order catalogue. Both were launched in October.

‘We will also be involved with the breakdown of what merchandise goes where. The country set have a way of buying things, and feeling comfortable in the store is important. We are bringing the feel of a country house into the store,’ says JHP creative director Raj Wilkinson.

Farlows is spending more than£750 000 on the design and build of the flagship, situated on Pall Mall. It has an existing store in Pall Mall, which it will leave next year, and also has stores in Edinburgh and Reading.

Farlows sells fly-fishing and hunting accessories, as well as country wear. However, it is keen to reposition itself as a modern British countrywear brand worldwide, according to JHP strategic director Steve Collis.

‘In the longer term, Farlows will look to get concessions in other stores in the UK and beyond,’ says Collis.

JHP was appointed to the project without a pitch.

Business model is what depicts the leadership style

Nextstrain is a platform designed to facilitate and promote the sharing of genomic data – here, Design Week speaks with two of its researchers about how its global community is