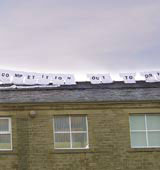 While celebrating its 10th anniversary last week, Majestic saw an opportunity to give it large to its competitors.

The consultancy hung a load of white T-shirts with the statement ’10 years of hanging the competition out to dry’ on a 20m washing line on the roof of its offices in Huddersfield.

This was visible to trains coming into and leaving Huddersfield station, says a Majestic spokeswoman.

Unfortunately, the line was not as majestically assembled as the consultancy would have hoped. A gust of wind blew the middle portion down, leaving ’10 years of hanging out to dry’ the only clearly visible statement.

‘I don’t think anyone noticed,’ she says. What can you say?

Ways of finding yourself going up the wrong road