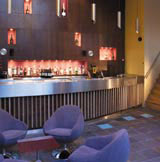 A few years back Indian restaurants shed their flocked wallpaper, Ganesh sculptures and sitar music in favour of heavily minimalist interiors. And after a year saturated with Bollywood excess, colour and kitsch may also have had their day. So what directions are curry house interiors heading now?

But isn’t even that look passÃ©? One of the newest Indian restaurants in London is Silka, based near Borough Market, which officially opens this month after a six-week trial period (DW 23 January). Here, understated Indian charm rules.

‘With Silka, we tried to incorporate muted cultural references, such as traditional Indian materials. People need something to relate to,’ he says. Similarly, he created the merest suggestion of arches in the Cinnamon Club’s lounge bar, the shapes inspired by Indian temples.

Subtlety is the new buzz-word. ‘Designers are moving away from themed interiors, such as Mexican restaurants with saloon doors and sombreros. And the opposite of that is referencing the delicate aspects of a culture,’ Kneer says.

Kneer predicts a time when Indian restaurants won’t hark back to their roots at all, such is the ubiquity of Indian food to our culture. ‘Japaneseand Chinese-influenced cuisine, such as seared tuna and noodle dishes, is now so part of our own that it is no longer served in Far East-style restaurants. Indian food will go the same way,’ Kneer says.

Fitch London creative head Tim Greenhalgh agrees Indian food is so widespread that, like pizza, it no longer needs to be served in surroundings particular to its heritage. Not all pizza restaurants feature checked table clothes and red, green and white colour-ways, after all. It would just be a shame, he says, if Indian restaurants died out.

Contemporary Indian restaurant design, he says, is more about interpreting values than slavishly re-creating people’s image of an anglicised curry house. And authenticity is key.

‘People are better travelled and more sophisticated, and want to be able to pinpoint the exact origins of their food – “India” just won’t do,’ Greenhalgh says. ‘People want a real experience, not the equivalent of eating a Mexican meal at a Harvester,’ he adds.

He predicts a polarisation of Indian restaurants. ‘We will see a mix of high quality places that will resemble any good restaurant, and an increase in “pop-in” sanitised eateries,’ he says.

Changes in the wider leisure and entertainment market are forcing Indian restaurants to evolve, says Julian Taylor, designer of modern venue Mint Leaf, which opens soon in central London (DW 16 January). Standards in design and service have gone up, he says, and launches in particular must provide the very best in these areas.

One of the major changes is the way people are eating curries. It is still a ‘stomach-filler’ after five pints, but is increasingly becoming a ‘destination’ meal where you have a preand post-dinner drinks, too. This is changing the way restaurants are designed, according to Stuart Watt, senior designer at Philip Watts Design, which created Nottingham restaurant 4550 Miles from Delhi last summer (DW 22 August 2002).

‘The nature of eating Indian food is increasingly to book a table rather than head for a curry house after the pub shuts,’ Watt says. ‘So people expect quality food, a decent wine list, good service and a reason to linger afterwards or arrive early.’

As a result, bars are now springing up as part of restaurants, mimicking the Akbar at Red Fort restaurant in London’s Soho by Fitch London, and Mueller Kneer’s Cinnamon Club bar. Mint Leaf will include a ‘holding bar’ for pre-dinner drinks, says Taylor.

Preconceptions about Indian restaurants may be hard to shift, however. People expect them to be dark and heavy, and anything new may be greeted with suspicion. As Greenhalgh points out, ‘Why is Indian food never eaten outside?’

‘People expect a certain type of evening out at Indian restaurants,’ says Parb Johal, who as creative director at Antenna Creative has designed interiors for Derby restaurant, Sharmas, which opened in December 2002.

The Midlands, Johal says, is witnessing a general explosion in restaurants, and the lack of contemporary Indian interiors of the sort found in London means Sharmas stood out with its more sophisticated look.

‘Restaurants used to give British people an “Indian” experience. That’s less necessary now as we’re more multicultural and second generation Indians are more integrated. Some of us haven’t even been to India,’ he says.

There’s no need to mourn the imminent death of the curry house, though. T

he peculiarity of Indian food, more than any other in this country, is its popularity, says Johal. ‘It’s always been accessible with broad appeal.’

Greenhalgh agrees. ‘Curries are sociable, like tapas, where people share dishes. That’s why they’ll continue to grow in popularity.’ And that’s good news all round.