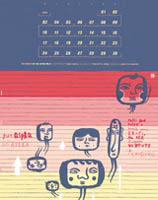 Trickett & Webb launches its 2003 calendar next week, featuring illustrations by Peter Blake, George Hardie and Peter Grundy, among others. This year’s calendar is based on terminology that can be applied across both sporting and business situations, such as touch base and game plan, says Trickett & Webb designer Alistair Brown. (Hit the Mark by Yvonne Kushel and Go the Extra Mile by Sara Fanelli pictured.) Illustrators were given an open brief – each was given a choice of titles and the group only specifies which colours to use, adds Brown.